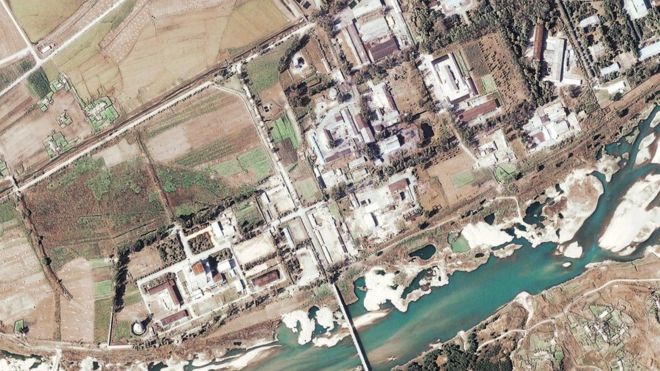 The caving in of land at the site, however, may not have been the result of the estimated 4.9-magnitude earthquake that took place 8 minutes after the test, the analysts say.

A more powerful earthquake the Comprehensive Nuclear-Test-Ban Treaty Organization estimated to be of a 5.8 magnitude, but later revised to 6.1, is evidence the bomb could have unleashed as much as 250 kilotons of energy, significantly more than the previously estimated 100-120 kilotons.

Tremors from the earthquake are likely the cause of a possible “collapse chimney crater” at the site, the analysts added.

There is evidence the North Koreans will not stop tests at Punggye-ri, they said.

The images from Friday indicate “new tunnel excavation activity” could be under planning, as the photos show some “mining carts on the rail line that extends from the West Portal to the spoil pile.”

The analysts also said the North Portal used for the last test may not be used and that they cannot rule out the possibility radioactive material was released into the atmosphere following the test.

“The yield of the test clearly shows North Korean progress in increasing the yields of their nuclear weapons,” the analysts said. “The significance of this is that it has the potential to dramatically increase the threat posed by” its ballistic missiles.