dpa/GNA – The German economy is expected to have contracted at a dramatic pace last year, after the launch of tough restrictions to combat a surge in coronavirus cases unleashed an economic crisis.

Analysts forecast that the Federal Statistical Office (Destatis) will on Thursday say Europe’s biggest economy shrunk by 5.1 per cent last year, after growing by 0.6 per cent in 2019, with vast tracts of economic and public life having been shut down for large parts of 2020.

Analysts have also revised up their gross domestic production forecasts. In particular, the nation’s key manufacturing sector is expected to have offset a slump in the service sector, with industry rebounding strongly from the lockdown launched in March and April.

Manufacturing has also largely been excluded from the latest measures introduced in November and extended to the end of January, with the anti-coronavirus steps principally aimed at the service sector and households.

The data also served to raise hopes that Germany might escape a fourth-quarter contraction after the pandemic plunged the nation into an economic downturn of historical proportions. 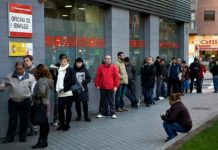