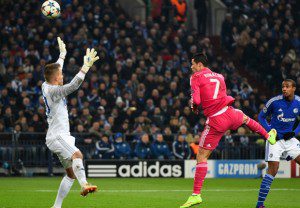 The coach has hailed the goals coring return of his star forward, who went level with Lionel Messi and Raul at the top of the Champions League scorer chart Carlo Ancelotti has stated that ?Cristiano Ronaldo is back? after the Ballon d?Or holder ended his goal drought in Real Madrid?s 2-0 win over Schalke on Tuesday.

The Portugal international has been under unfamiliar negative spotlight in recent weeks, having missed two Blancos matches with a petulant Liga suspension and having not scored since January 18.

However, a header in the first half of Madrid?s Champions League last-16 first leg at the Veltins Arena silenced his doubters and saw him go level with Lionel Messi and Raul as the top scorer in European competitions, with 76 goals across continental tournaments.

?Ronaldo is back,? Ancelotti told Canal Plus. ?He scored, he made an assist ? he did well.?

The coach, who guided Real Madrid to their 10th Champions League and European Cup triumph last year, was satisfied with his team?s performance against a stubborn and well-organised Schalke side.

?I?m happy,? Ancelotti continued. ?It?s never easy coming into such a game after our period in La Liga. But the players showed good attitude and put in a good performance. It went well.

?The game did not allow brilliance, with Schalke trying to hit us on the counter attack. After we went 1-0 up we controlled the game. We tried to score the second and thankfully we did.?

Ancelotti usually refrains from being animated on the touchline but Marcelo?s sumptuous strike late in the second half to seal the victory for the visitors had him celebrating with his players and he explained his reaction was due to the oddity of his left-back?s goal.

?I went to celebrate the goal on the pitch because it is so unusual to see Marcelo scoring with his right foot,? the Italian added.

The return tie ? which will decide whether Madrid or Schalke head into the quarter-final stage ? will take place at the Santiago Bernabeu on Tuesday March 10.

Government appreciates the contribution of religious groups to development-Minister