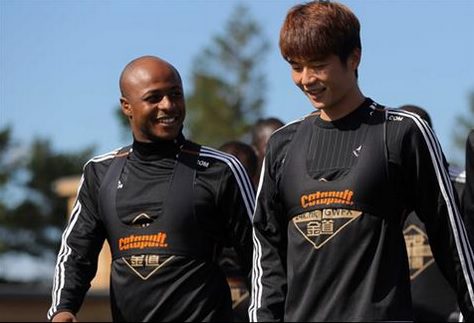 Andre Ayew and a teammate sharing jokes ahead of Friday?s training

Andre Ayew and his Swansea teammates rounded up their preparations towards the weekend?s visit of Manchester United on Friday.

The Swansea team went finalized their week-long preparations with an intense session in Fairwood.

Ayew will be one of the players expected to have a huge impact on Sunday?s game at the Liberty Stadium.

The Ghana international has enjoyed a wonderful start to his career at the Welsh club since his summer arrival from Olympique Marseille as a free agent. 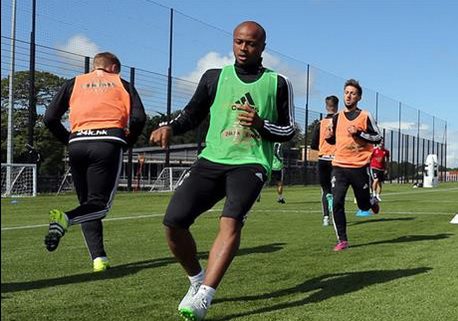 He scored on his Premier League debut in the opening day draw at Chelsea before scoring again in the home win over Newcastle the week after.

The whole Swansea team has been ticking since day one with the likes of Jefferson Montero, Bafetimi Gomis and Andre Ayew posing already as the standout performers.

But manager Garry Monk admits his side will need to put up another impressive display in order to beat Manchester United who have also basking in their unbeaten start to the season.

?It?s always very difficult when you face the big clubs,? he said. 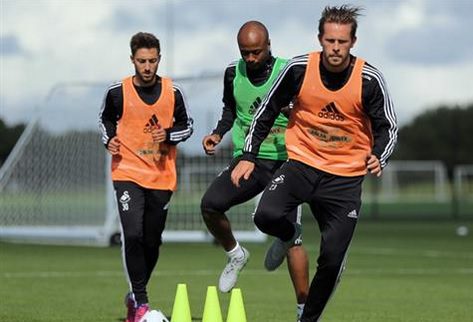 Time for some cone work

?They (United) have added a lot of quality and depth to their squad and have world-class players.

?We are the underdogs, but we?re at home and we want to put on a performance in front of our own fans.

?There is plenty of motivation for the players after our two wins last season and we?ll use that going into this game.

?But we believe in ourselves, we have our own way of working and that will be no different this weekend. We will probably have to produce our best performance of the season so far to come away with the result.?

Watch the video of Swansea?s training below: