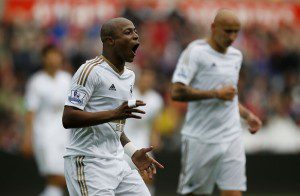 Swansea City?s Andre Ayew of during the Pre-Season Friendly match at the Liberty Stadium, Swansea.

Ghana playmaker Andre Ayew showed his versatility and persistence in Swansea City?s final preparatory match ahead of the start of the English Premier League on Saturday.

The Black Stars deputy captain was in action for 75 minutes as the Swans warmed up for their collision with the champions with a drab goalless draw against Deportivo La Coruna.

The son of legend Abedi Pele played in two different positions as they wrapped up their preparations ahead of the start of the league on Saturday.

Garry Monk?s men face the demanding task that is a trip to Chelsea on the opening day of the Premier League season in seven days? time.

It is safe to say Jose Mourinho?s team will be considerably tougher opponents than a Deportivo outfit who only just avoided relegation from the Spanish top-flight La Liga in the spring.

But while Monk would have preferred to sign off before Chelsea with a home victory, he is only too aware that it is dangerous to read too much into pre-season results.

This time last year, after all, Swansea were thumped on their own patch by Villarreal. Seven days later, they won at Manchester United.

Swansea ought to have been in front inside six minutes against Deportivo, after Wayne Routledge won possession and rolled the ball across the edge of the penalty area towards Bafetimbi Gomis.

Seeing that Andre Ayew was better placed behind him, the Frenchman swept the ball on with his heel.

The healthy Liberty crowd rose in anticipation, but Ayew did not catch his shot properly and centre-back Alex Bergantinos made a sliding block to save Deportivo.

The pattern for the first half had been established early on, with Swansea controlling possession and territory but lacking the quality to do damage in the final third.

They kept probing, with Ayew and Gomis showing good persistence down the left before the striker dragged a 25-yard shot wide of the target.

Jonjo Shelvey, who was preferred to Gylfi Sigurdsson in the No. 10 role, looked the player most likely to make something happen in the first period.

Swansea almost opened up their La Liga opponents up just before the break when Routledge slipped in Ki Sung-Yueng down the right, but his inviting pull-back was cleared by Arribas as Ayew loomed.

The Ghanaian was operating on the left flank with Routledge down the right and Shelvey the most advanced of three midfielders.

But Ayew switched to the right at the break as Routledge made way for Jefferson Montero and Sigurdsson replaced Shelvey.

A goal would have been welcome, but Monk will not be too concerned about results until next Saturday evening.