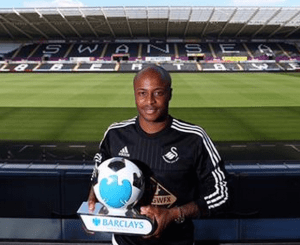 Hurray!!! It was in the month of August and Andre Ayew proved how an ?august? signing he was for Swansea City. Winning the player of the month to set a new Ghanaian record for the first time in twenty years, the deputy Black Stars captain deserves all the praises. All hail Andre Ayew the ?August? king of English soccer.

When Andre Ayew decided to sign a four year contract with Swansea City, some of us were disappointed in the move at a point that Athletico Madrid, Liverpool and AS Roma were keen on securing his signature but the former Olympique Marseille winger has proven how ?august? a signing he was for the Swans. All hail Andre Ayew the ?August? king of English football.

This enviable record was set by Tony ?Yegoala? Yeboah, the king of Leeds United in March 1995 and a repeat in September 1995. Tony Yeboah won the March 1995 player of the month award after he scored five goals for his side in five games, an average of a goal per game bagging a brace against Leicester and Chelsea and scored once against Coventry guiding Leeds United to win all the aforementioned matches.

In September 1995 Tony won the award again by scoring five goals again, but this time in three matches. That was then. Gone are the days. Tony hit a hat trick against Wimbledon and one each against Tottenham Hotspurs and Sheffield United.

King Yegoala was crowned again in September the same year making it the first and the last time a Ghanaian won it. But who knew the legend in the making Andre Morgan Dede Ayew was trekking to Swansea to become the ?august? signing they were waiting for. All hail Andre Ayew the ?August? king of English football.

After the exploits of Tony Yeboah in the English Premier League in the mid-nineties, many Ghanaians have tasted, thrived and succeeded in the Premier League but none was able to replicate the performance of Tony Yeboah to win the coveted award. The winger bagged in three goals and made an important decisive assist in four matches to win the award. It took Andre Ayew just a month in the Premier League to win the award with outstanding performances against champions Chelsea and giants Manchester United. Obviously, all must hail Andre Ayew? the ?August? king of English football.

I know you remember Odartey Lamptey, he played for Aston Villa but did not edge closer to the award and so were the likes of Alex Nyarko for Everton, Muntari and Kevin for Portmouth, Essien for Chelsea and recently Atsu for Bournemouth, Schlupp for Leicester City, Jordan for Aston Villa and Baba Rahman for Chelsea.

None of these players has won the award before. But it has taken the legend in the making, Andre Ayew just thirty one days to win the award. Surely, all must hail Andre Ayew the ?August? king of English football.

Micheal Essien and Sulley Ali Muntari are the two most successful Ghanaian players in the history of the English Premier League with Essien winning the premier league title as well as the FA Cup with Chelsea and Sulley winning the FA Cup with Portmouth, yet none of them ever won the award. Definitely, all will hail Andre Ayew the ?August? king of English football. However Andre will have to keep the form and be consistent as his performance ever since he joined Swansea City has been sky-rocketing. Not surprised though that many refer to him in Ghana as ?Swandede?. Yes that is the august king of English football.

Yes, Andre must be consistent. It is easy to get to the top but it?s challenging to maintain the standard.

Best wishes for Andre Ayew as the season returns from the international break as we continue to hail the AUGUST king of English football.