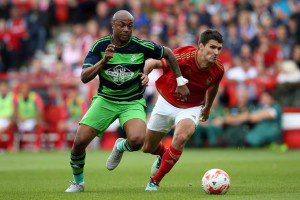 Andr? Ayew, playing for his new club Swansea City, against Nottingham Forest in a pre-season friendly.

In some rare games, conventions fall away. Tactical schema are ripped up, the rationale about the importance of the team disappears, and the match becomes the struggle of one player against the rest.

They?re the days when Roy of the Rovers seems true to life and, however dangerous they may be in convincing individuals that they can win games single-handed, there?s a visceral charge about them. It?s in those games that football takes on a mythic quality: one man against a massed opponent.

English minds, perhaps, will think immediately of David Beckham?s performance against Greece at Old Trafford in 2001, a display of extraordinary energy and perseverance that unfortunately lured him to tactical indiscipline for much of the rest of his England career. Or there was Steven Gerrard for Liverpool against Olympiakos in 2004, Dragan Stojkovic for Yugoslavia against Spain in 1990, Pel? for Santos against Boca Juniors in 1962, Stanley Matthews for Blackpool against Bolton in 1953. They?re rare ? football is almost invariably a team game ? but when they do happen, they?re special.

Sunderland fans of a certain age still get misty-eyed about Kieron Brady?s role in a 4-3 victory over West Ham in 1990, a memory all the more poignant because illness prevented the promise that glimmered in that game from ever being fulfilled. But ? and I accept this is a personal choice ? for me, one example stands out above the others.

Ghana, after their hugely impressive Cup of Nations and then World Cup in 2010, were many people?s favourites to win the tournament in Equatorial Guinea and Gabon in 2012, but they?d been restrained in the group stage, albeit qualifying with seven points. In the quarter-final in Franceville, they faced Tunisia. Ghana again disappointed, except for one player.

Andr? Ayew was 22 at the time and had spent most of his career cursed by comparisons with his father, the great Abedi Pele. ?What my father achieved in Ghana is huge,? he said. ?He brought a lot to the country. I?m very proud of what he has done, but this doesn?t have any bearing on my game. Sometimes people may make useless comparisons. I suppose it?s normal, but I had to learn to live with that.? This was the day when he made the comparisons secondary, the day when he became a star in his own right.

John Mensah had headed Ghana into an early lead and Saber Kelifa had nodded an equaliser just before half-time. From then on, it was all about Ayew, surging forward, inspired by a sense of will and purpose his team-mates couldn?t match. Tunisia, never a side shy about the physical side of the game, kicked lumps out of him, again and again, but Ayew was implacable. Every time he was kicked he came back for more. His drive was relentless. The final minutes of normal time consisted almost entirely of him charging at the Tunisia backline, the ball being cleared and him going again. His reward came in extra time as the Tunisia goalkeeper Aymen Mathlouthi dropped a cross and he knocked the bouncing ball into an empty net; it was an ugly goal, but it was a gift Ayew thoroughly deserved.

In the semi-final, Ghana were lethargic and lost 1-0 to Zambia. That really has been the story of Ayew?s career throughout: moments of incandescence followed by patches of ordinariness. His talent has been evident for years. He is quick and direct, a threat in the air arriving late in the box and it seems he has begun to take on a leadership role. For Swansea to pick him up on a free transfer, even with a reported signing-on fee of ?5.7m, is a remarkable coup, a sign both of the Premier League?s increasing financial domination of Europe and of Swansea?s growing reputation.

?He is not going to be a one-player saviour for the team or anything like that,? Garry Monk said after Ayew had scored a fine goal in the pre-season friendly against Nottingham Forest. ?He is a team player and everyone has to be contribute. I do think he will bring quality and he has experience as well ? I already hear him talking to the group within games and within training sessions. He brings that. But it?s not for him to go and score all the goals and create all the chances ? everyone has to do that.?

That?s all sensible and true, but the exciting thing about Ayew is that he is capable of being a one-man saviour but has learned that most of the time he shouldn?t try to be; if he can find consistency he will be brilliant. He should fit in perfectly in Swansea ? and not just because his second name is Morgan.

His younger brother, Jordan, who has just joined Aston Villa for ?12m, is rather different. He plays higher up the pitch than Andr?, and the fact he scored 12 goals and registered five assists for Lorient last season indicates he has talent. But he is a hugely frustrating player.

Filippo Inzaghi might have been born offside, but Jordan Ayew seems to have made it a favourite holiday destination and visits frequently (stats from whoscored.com show he goes 0.7 times a game, but it feels like more). At least with Inzaghi it could be argued that he was offside a lot because he lived always on the edge, forever trying to steal a couple of feet on a defender, pushing the line; with Ayew it often just seems like doziness.

That adds to a general sense that he lacks the game intelligence of his brother. Football is full of counter-factuals, but what if, with Ghana 2-1 up against Germany and playing superbly during the World Cup, Jordan Ayew had squared to leave Asamoah Gyan with a relatively simple finish, rather than vainly ? in both senses of the word ? attempting a shot? Miroslav Klose wouldn?t have come on to score an equaliser, Germany might not have rediscovered their shape and they might not be world champions.

Jordan Ayew chooses the wrong option a lot, which is one of the reasons his pass completion rate is under 80% despite him attempting only 0.6 long balls and 0.2 crosses per game last season. There was a match at this year?s Cup of Nations when yet another turn down a blind alley led to a great collective groan from the press box, not just from the Ghanaians but from everybody, aggrieved that another piece of coherent play had withered. Ayew was dispossessed 4.0 times per game last season, more often than anybody else in Ligue Un, while losing possession with bad first touches 3.8 times per game, 27 per cent more than anybody else in the league.

?He is a good player and he will do good things and it will be exciting for sure if we get to play against each other,? Andr? said of his brother (Swansea face Villa on 24 October), which is all very proper and fraternal of him.

Realistically, though, there is a gulf between the pair.

Jordan plays as though he is far more than two years younger and unless he matures rapidly there?s a real possibility he?ll become one of those players who aggravate their own fans far more than they excite them.

Andr?, though, could yet be very special indeed: what he did in Franceville against Tunisia spoke of an exceptional talent.