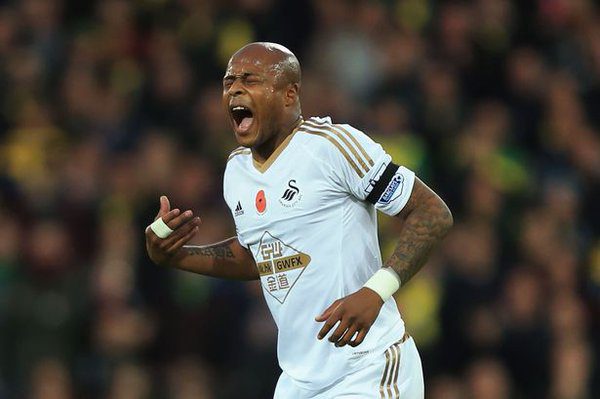 Andre Ayew’s Swansea City slumped to yet another defeat despite putting up a resolute challenge against Manchester City on Saturday.

The Ghana forward, fresh from missing out on the BBC African Player of the Year award, came close to pulling his side level late in the first half after going behind to a Wilfred Bony strike in the 26th minute.

But Ayew’s header off a free kick went wide.

Swansea however went on to impress by bossing most parts of the game at the Etihad but were lacking the finishing.

Ayew was replaced in the 83rd minute by Bafetimbi Gomis who thought he had rescued a point for Swansea when he scored in the 90th minute.

But their heroic efforts were undone in added time when a Yaya Toure strike deflected in off Kelechi Iheanacho.

Swansea who sacked their manager Garry Monk during the week extends their poor record of one win in 13 minutes with the defeat to City.