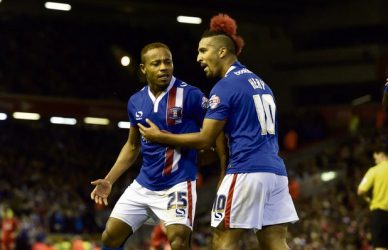 The veteran, who described his equaliser in front of the Kop as one of the best moments of his career, says United should take immense pride from their valiant showing at Anfield.

And the Ghanaian says Keith Curle?s team and their fans ought to be buoyed by the feat of pushing Liverpool to penalties in the dramatic Capital One Cup game.

Asamoah said: ?No-one?s head is down. It was a hell of an effort and I?ve got nothing but high praise for everyone involved.

?The fans behind us made more noise than the Liverpool fans. Everyone involved with Carlisle United should hold their heads really high.

?It?s going to put us in good stead for the league. If this doesn?t motivate you to do better and to achieve, I don?t know what will.?

Asamoah admitted he was ?devastated? at Carlisle?s shoot-out defeat but, as a boyhood Liverpool fan, will always treasure the moment he fired home at the Reds? famous ground to bring Curle?s side level at 1-1.

The 34-year-old buried a Bastien Hery pass before celebrating with a cartwheel and a pre-meditated machine-gun routine, which saw Hery hurl himself to the floor.

?It was an unbelievable buzz,? Asamoah said. ?When the ball came from Bastien I just thought, ?keep my head down, keep it low and as hard as possible along the ground?.

?I didn?t see it go in but I heard the roar and thought, ?wow, I?ve done something here?. It was a special moment for me.

?As for the celebration, we just decided on it when we got to Anfield. I just said, ?when I score, I?ll cartwheel and I?m gonna do a machine-gun thing ? one of you is going to have to fall over?. It doesn?t mean anything really, just a bit of fun.

?It was a special night for me. I was very emotional at the start of the game. I?ve been following Liverpool for so long ? my favourite times were when Ian Rush and John Barnes were playing ? and I?ve always looked out for them.

?To come here, play and score ? unfortunately we lost on penalties, but you have to take positives out of everything and that?s one I will take. I will always remember my first professional goal, and my first for my country, and this is up there with them.?

Asamoah also had consoling words for the United players who suffered heartbreak from the penalty spot, with Danny Grainger and Luke Joyce having their efforts saved before Adam Bogdan kept out Hery?s kick to send Brendan Rodgers? side through.

?I felt when it went to penalties there?d only be one winner ? us,? Asamoah said. ?It?s a sad way to lose the game. But we have to hold our heads high. That?s the best I?ve seen Bastien play. He showed his true quality against Liverpool and it was devastating to see him miss, but I?m sure he?ll bounce back from that and the lads will help him along.

?At the same time, we can be proud of what we came and did against Liverpool. I?m so proud of the boys. We showed our quality at the times we kept the ball, passed it, defended as a unit and broke when we got the chance.

? If you check the shot stats Liverpool had so many, but we kept them to 25-30 yards, and that?s a great testament to the boys and how well we defended.

?The team spirit we have, the never-say-die attitude the players are showing this year, kept us in it. Other teams? heads would have done down after conceding but we said, ?no, we?re still in this, we ain?t gonna lay down?.?

Wednesday?s efforts also brought plaudits for two other Carlisle players, with Michael Raynes and Alex McQueen both named in the Capital One Cup team of the round.

Wing-back McQueen also believes the Anfield tie can set the Blues up for a strong League Two season.

The former Tottenham man said: ?We need to draw lots of positives and apply it to our league campaign.

?We have a great man-manager in Keith [Curle] at the helm, and the Carlisle fans? support at Anfield was fantastic, so we know that we have the right backing and environment to progress.

?We need to harness what we did against Liverpool, and also against QPR in the previous round, and start at the up-tempo every week.

?There?s a great bunch of lads here at Carlisle, and it?s reassuring when you can see that all the players want to work hard and play for the manager.?

Tokyo Olympic flame to be on display next week