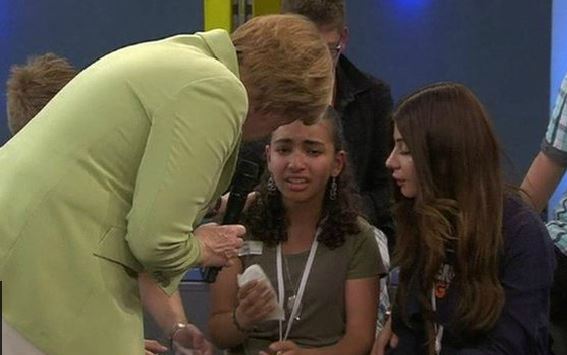 When Angela Merkel noticed the girl, Reem, was crying, she went to comfort her

At a forum for young people, Mrs Merkel tells the Palestinian girl, Reem, that not all migrants can stay in Germany and ?some will have to go home?.

Mrs Merkel then strokes Reem, who is now crying, on the back.

Reem had said she and her family had been waiting four years to gain permanent residency in Germany.

Within hours of the video being broadcast, the term #Merkelstreichelt (Merkel strokes) trended on Twitter.

In the video, Reem tells Mrs Merkel that her family was told they would have to return to a camp in Lebanon imminently ? only to receive a last-minute temporary German residency permit.

?I would like to go to university,? says Reem, in fluent German.

?It?s really very hard to watch how other people can enjoy life and you yourself can?t. I don?t know what my future will bring.?

Mrs Merkel replied that ?politics can be tough?, adding: ?You are an extremely nice person but you also know that there are thousands and thousands of people in Palestinian refugee camps in Lebanon.?

Germany could not manage if all wanted to move there, she said.

The right-wing Pegida group has marched against what it calls the Islamisation of Germany, and the country?s newest political party, Alternative for Germany (AfD), has called for tighter immigration control.

?The mistakes in the government?s refugee policies can?t be patted away,? Katrin Goering-Eckardt, a Green Party MP, said.

?This week has been fantastic for German public diplomacy. All that was missing was Merkel making refugee children cry,? the Belarus-born writer Evgeny Morozov said.