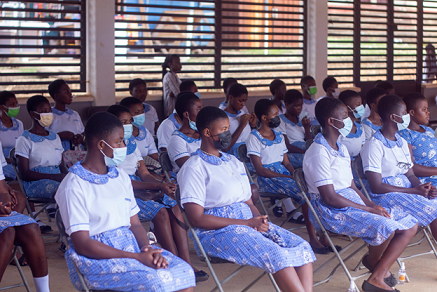 AngloGold Ashanti Obuasi Mine has organised a free breast and prostate cancer screening for women, men and school children at New Edubiase in the Adansi South District.

The screening, organised in collaboration with the AGA Health Foundation, Adansi South District Assembly, Adansi South Directorate of Health and the Edubiase Divisional Traditional Council, was part of the Mine’s programme on Breast and Prostate Cancer Awareness Campaign in its catchment area.

At a grand durbar to climax the Breast Cancer Awareness Month, Mr Edmund Oduro-Agyei, the Superintendent of Stakeholder Engagement at the AGA, observed that breast and prostate cancer were known to be the most recorded cancer among black people, which required a collaborative effort to fight.

In Ghana, he said, 70 per cent of women diagnosed with breast cancer were in the advanced stages due to low awareness, resulting in limited treatment success and high death rate.

Mr Oduro-Agyei said research showed that about 30 per cent of breast cancer patients were below the age of 35 years, which showed a relatively possible shift burden to women in their early ages.

He called for a nationwide breast cancer screening for women of all calibre and age, to completely understand the pattern of breast cancer distribution in Ghana to enhance early detection, diagnosis and treatment.

As part of the campaign, an amount realized from employees’ voluntary donations was presented to the Noguchi Memorial Institute for Medical Research (NMIMR) and Kumasi Centre for Collaborative Research (KCCR) in Tropical Diseases to support breast and prostate research.

Mr Kwadwo Anim, the Executive Director of AGA Health Foundation, expressed worry over the alarming increase in breast cancer cases in Ghana and called on the gathering to reach out to families and friends to encourage on self-breast examination and screening for early detection and treatment.

Breast cancer, he said, was most frequent cancer among women, stressing that its prevalence was increasing, and the need for urgent action.

Even though the cause of the disease was not known, it was advisable for all, especially women, to avoid smoking and alcoholism, which were risk factors of breast cancer.

Dr Daniel Yeboah, the Adansi South District Director of Health Services, advised the women to visit the hospital if they noticed lump, swelling, redness and darkening, change in size of their breast, dimpling and nipple discharge for early diagnosis to save lives.