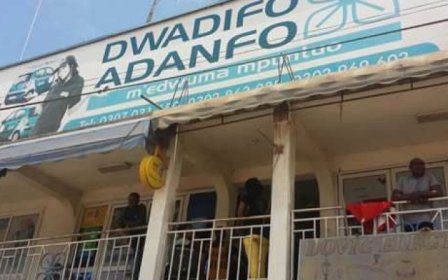 The visibly angered depositors said, the company has not been able to pay back thousands of Cedis received from them in savings just the same way DKM and other microfinance companies swindled hundreds of customers in the Brong Ahafo region. However, the office of Dwadifo Adanfo, the financial institution remained locked while desperate traders gathered at its premises.

The depositors revealed that, this was not the first time they besieged the office premises demanding for their money.

When News Ghana’s Prosper Agbenyega got to the scene, majority of market women were seen standing whilst others sat just on the steps leading to the company office.

They told News Ghana in an interview that, the company management has failed to return their savings even though they have made several attempts including besieging the company office.

“We want our monies return. We are aware of what is going on in the microfinance industry lately, talking of DKM and others. That is why we are also up to ensure that our monies are not gone,” a trader told News Ghana in anger.

Meanwhile, during the agitations by the depositors, no official of Dwadifo Adanfo microfinance is seen around to listen to the demands of the depositors.

But some, people hinted News Ghana that, ever since the depositors begun charging on the company management, the office have been under lock and key.

Depositors of savings and loans, microfinance schemes to receive payment