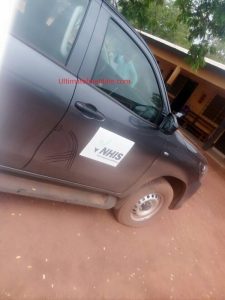 Unknown angry youth on Friday morning launched what witnesses say a fiercest attack on offices of the Zabzugu District Assembly in the Northern region and vandalized assets before fleeing after police allegedly failed to respond to calls for security.

Witnesses said the rowdy armed youth besieged the district assembly premises and with no sign of apprehension damaged properties including dustbins and flowers after failing to gain access into duty rooms before willingly dispersing.

Motive for the attack and those behind are yet to be identified but the district coordinating director told Ultimate News the belligerent attackers targeted three vehicles and deflated it tyres.

David Nyeke who is now acting District Chief Executive suspects the attack was aimed at the district coordinator of National Health Insurance Authority (NHIA) whose vehicle is among the damaged.

The suspected target and few other workers who were on seat at the time of the attack were unhurt and nothing was also pilfered by the rampaging youth.

David said the assembly had heard of the attack last week and informed police but the attackers outsmarted the security force by withdrawing the planned assault and only carried it out today when the police least expected.

The place has been calmed but workers have fled out of the district, according to David.

Attempts to reach the district NHIA boss for response was unsuccessful and police in the area also declined to comment.

Many agencies in the region have been attacked and workers sometimes beaten out by suspected supporters of the ruling New Patriotic Party (NPP) since it came to power.

The attackers have always demanded occupants of the position to stand down for their members to takeover since their government was in power.

The President has condemned the act and urged the Inspector General of Police to go hard on the attackers.

The Zabzugu District Assembly has always remained virtually empty on Thursdays and Fridays because a very huge number of workers reside in Tamale and Yendi due to lack of amenities and accommodation challenge.