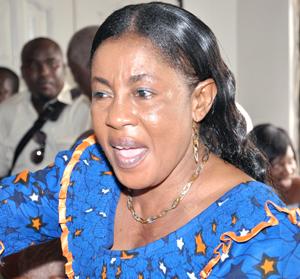 The National Women?s Organiser of the governing NDC, Anita Desooso, has denied allegations that she has an amorous relationship with the immediate past flagbearer of the opposition NPP, Nana Akufo-Addo.

There have been allegations by some political actors of a relationship between the two senior members of parties on different sides of the political divide, although this has been vigorously denied.

?It?s not true. Nana Addo is not my boyfriend. In fact it cannot be possible because there is no space, I?m already occupied. Nana is just a friend,? she asserted.

?So if some of the NPP women are jealous of me, saying their men are chasing me, I just laugh. They are only friends who like me. I already have someone, so there is no space for anybody.

?Nana Addo is not my lover please,? she stressed.

Anita Desooso, who was recently appointed deputy national coordinator of the National Disaster Management Organisation, maintained there has always been the perception that there is deep seated animosity between politicians of different persuasions, but through Nana Akufo-Addo?s efforts, especially through the presidential election petition, Ghanaians had realized belonging to different parties did not make them enemies.

She, however, wondered why the veteran politician would want to seek another shot at the NPP flagbearership, and challenged the NPP to groom young men to take up leadership positions.

Ms Desooso described Nana Akufo-Addo?s recent public declaration of his intent to contest, as one meant to intimidate people who had plans of seeking the party?s mandate for the 2016 elections.

However, the governing NDC, she confidently declared, would win the election irrespective of who the NPP chose as flagbearer.