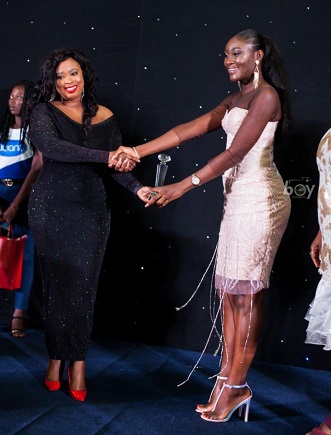 Anita Ofori and Edem Debrah were adjudged the overall best models of the year in the women’s and men’s categories respectively at the fourth edition of Ghana Models Awards.

The awards gala held at the Accra City Hall witnessed presentation of awards to persons who had contributed to the gradual transformation and growth of the modelling industry in Ghana.

According to Mr. Jerry Wonder Sampson, the Founder and Executive Director of the Ghana Models Awards, this year’s event was an upgrade with increased participation of numerous model agencies.

“The award scheme is progressing and gaining international recognition. We have really worked hard in promoting Modelling as a respectable profession in Ghana and now, it seems to have caught the attention of some industry stakeholders on the international front.

“There is a bright future for models in Ghana, and very soon, it will become a reality. This year, we are glad that we received a lot of response from Model agencies; fat more than last year. This shows that we are doing something worth talking about”, he said.

Madam Angela Trenton-Mbonde, Country Director for UNAIDS who is the Special Guest for the awards in her address commended organizers for creating the platform to recognize thriving personalities in the fashion and entertainment industry.

She congratulated winners on the night and reminded all attendees of the roles they would have to play in ending AIDS as a public health threat in Ghana by 2030.

Bikini or Lingerie Model of the Year – Bolanle Iddrisu

Catwalk Trainer or Choreographer of the Year – Abu Saddick

Discovery of the Year – Sheimamu Abubakar

Editorial or Commercial Model of the Year ( Female) – Debby Fayose

Editorial or Commercial Model of the Year (Male) – Philip Andoh

MakeUp Artiste or House of the Year – Lux By Lorey

Model Publicist or Media Platform of the Year – Francis Addo

Most Promising Model of the Year (Male) – Glenn Zime

Most Promising Model of the Year (Female) – Vanessa Delah

Plus Size Model of the Year – Esther Akua Mawutor

Video Vixen or Fox of the Year – Nutifafa Ruthy