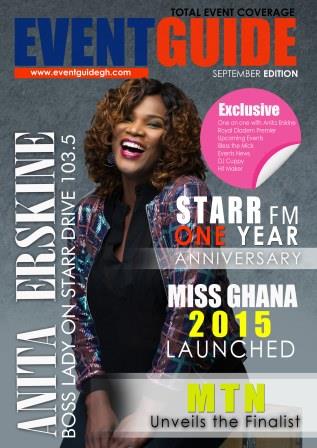 Anita has been in the entertainment industry for a long time, she made her television debut on Metro T.V in 1997 but has been a household name since her comeback in 2007.

The Newspaper Magazine seeks to celebrate her as an outstanding female media personality over the years and has decided to put her up on the front cover of its September edition.

The CEO of the magazine Newspaper, Kelvin Kenneth, said, Anita as a media personality has worked hard and diligently over the years and is happy about her success so far. He hopes and believes that she will go places and reach higher heights in media and beyond. The nominations and awards she keeps getting only go a long way to show how Ghanaians and the world at large appreciate her input.

?Anita Erskine?s strong but calming voice and the confidence she exhumes always graces our television screens and now radio, which only goes to show her versatility; not forgetting her light-heartedness and very contagious sense of humor. EventGuide Newspaper Magazine has taken the envious step to show the world how awesome she is.??

Anita Erskine in her career has also starred in a movie, ?Single and Married? alongside actors such as Kofi Adjorlolo, Yvonne Nelson, Chris Attoh and Nadia Buari. She is definitely an all-rounder!

She has hosted television shows which include Making of a Mogul, The One Show, Pamper Your Mum and Discovery +233. Anita is co-host a.k.a ?Boss Lady? on Starr Fm?s Drive with Bola Ray. She was recently announced TV Hostess of the Year at the annual City People Awards in Lagos and has been nominated for 2015 Radio and Television Personality Awards.

Grab a copy at Filling stations, Starr Fm, Solid Multimedia, Live Fm, Kasapa Fm, Tavern2131 and tertiary institutions across the country or call 0267281168. You can also visit www.eventguidegh.com for the soft copy.

Roger A. Agana Wins Forty under 40 Awards under Media Category