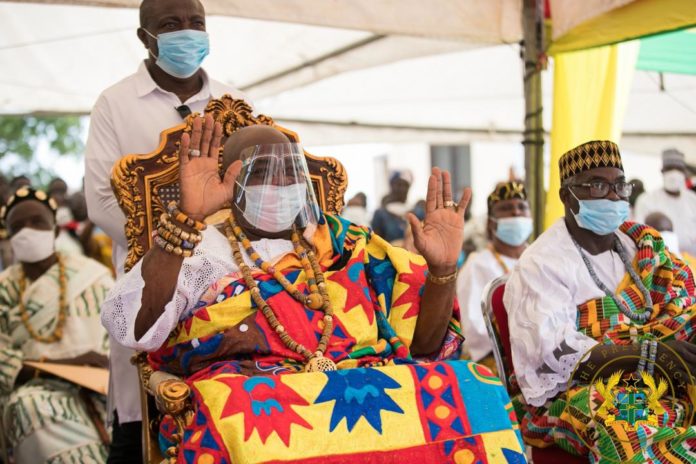 Torgbui Sri expressed appreciation to the President for having demonstrated true love to the chiefs and people of Anlo through the creation of the Anloga District from the existing Keta Municipality among other things.

He said this while giving his welcome address during the President’s visit to the Anlo State said completed and ongoing projects such as the Lagoon Landing Site, Anloga, Bomingo Steel Bridge and the new Anloga District Assembly Complex being constructed were testaments to Nana Akufo-Addo’s love for the area, thus, deserving of the people’s support.

“We assure you of our unflinching support in bringing development to our District and wish you God’s protection, guidance, wisdom and all the best and success in your campaign for four more years.”

Torgbui Sri said though the people of Anloga District were grateful for the good works so far, it would be a great relief to the people if government could work to deliver before the end of 2020, the 20-kilometre Agortoe-Tregui- Bleamezado to Bekpo Road initiated by the previous government.

He said “another road project demanding prompt attention is the Srogboe to Anyanui Road, which is in dire need of rehabilitation”, as well as Alakple-Kome, Atito-Fiaxor, and Galo Sota- Bomingo roads.

The Awoamefia also appealed to the President to consider constructing a sea defence wall at Fuveme near the Volta estuary to prevent “the sea from wiping them off the face of the earth.”

President Akufo-Addo and his entourage’ visit to the Volta Region was aimed to among others, commissioning a 16-unit classroom block at Keta Senior High Technical School and the Keta Water Expansion project.