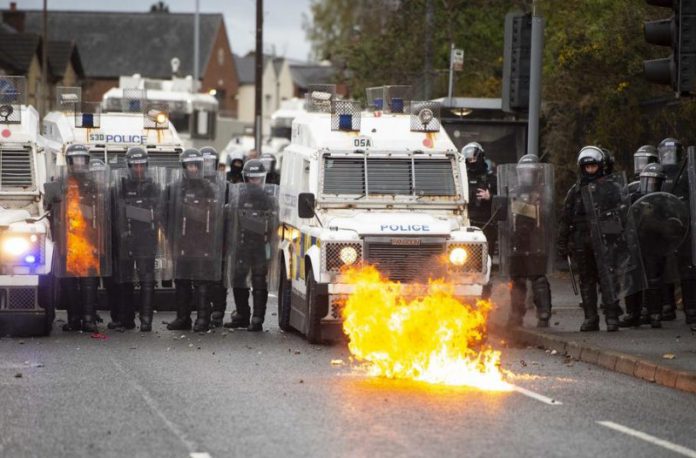 British Prime Minister Boris Johnson and his Irish counterpart Michael Martin made a joint call for calm, as did President Joe Biden’s administration in the United States, PA reported.

Northern Irish politicians had earlier joined together to condemn the violence that has shaken the region over the previous six days after eight police officers were injured in clashes that hark back to the dark days of conflict in the deeply divided region.

A statement released by Northern Ireland’s Deputy First Minister Michelle O’Neill on Thursday said members of the Northern Ireland Executive, the devolved regional administration, are “gravely concerned” about the violence and called for calm.

Anger on the pro-British side of the community was sparked by the exoneration by police of O’Neill and other party members after they broke coronavirus rules to attend a funeral for an Irish Republican Army (IRA) member, as well as ongoing problems with the flow of trade into Northern Ireland under a post-Brexit deal agreed with the EU that seem to isolate the region from the rest of the United Kingdom.

“Attacks on police officers, public services and communities are deplorable and they must stop,” the statement read. “Destruction, violence and the threat of violence are completely unacceptable and unjustifiable, no matter what concerns may exist in communities.”

It added: “While our political positions are very different on many issues, we are all united in our support for law and order and we collectively state our support for policing and the police officers who have been putting themselves in harm’s way to protect others.”

The move is an unusual step as the region and its politicians are deeply divided over identity.

Secretary of State for Northern Ireland Brandon Lewis, a member of the British government, flew in to Northern Ireland on Thursday afternoon, planning to meet the leaders of the main political parties to discuss the unrest.

On Thursday, Eric Mamer, European Commission spokesperson, said: “We condemn in the strongest possible terms the acts of violence that have occurred in Northern Ireland over the past days.

Nobody has anything to gain from this.”
Originally seven officers were said to have been injured, however the Police Service of Northern Ireland (PSNI) said later on Thursday eight had been injured and two arrests had been made.

PSNI Assistant Chief Constable Jonathan Roberts told the BBC that 55 police officers have been injured during the six nights of violence.

Other areas across Northern Ireland which have also faced violence in recent days include Derry, Newtownabbey, Carrickfergus and Ballymena, mostly from unionists, but clashes spilled across the sectarian divide on Wednesday and Thursday night.

Both identities had parity backed up by the UK and Ireland being equal partners in the EU, but Brexit has reopened those divisions as the island of Ireland is now split with one part inside the EU and the other outside.

The compromise to keep Northern Ireland largely aligned with EU rules has riled the hardliners on the pro-British side who feel themselves increasingly cut off from the motherland.

On Tuesday, March 30, the Public Prosecution Service announced no action would be taken against the 24 Sinn Fein members – including O’Neill – who attended a funeral for IRA member Bobby Storey, which saw 2,000 people line the streets and pay their respects.

O’Neill has since apologized for her attendance, however, the violence began the next day, on Good Friday, almost exactly 23 years since the peace deal was signed.

The actions of Northern Ireland’s police force and how it handled the funeral are being investigated by the police watchdog, HMICFRS.