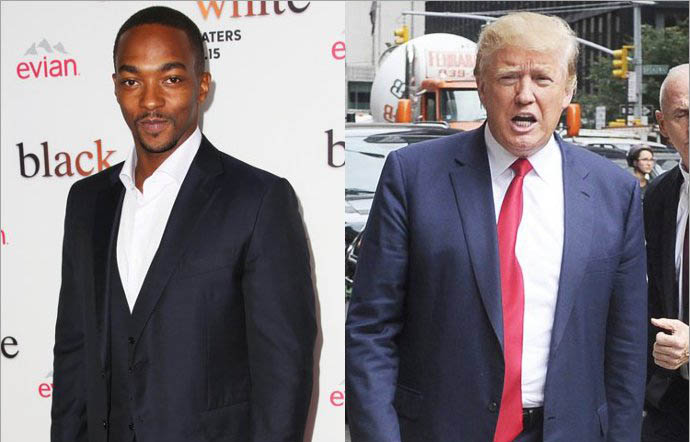 Anthony Mackie learned the hard way that he should never joke about Donald Trump. The ?Captain America: The Winter Soldier? star faced a backlash from social media fans soon after saying he wanted to run the Republican presidential hopeful?s campaign.

?I would 100 percent want to run Trump?s campaign. 100 percent,? Mackie told BET correspondent Smriti Mundhra while promoting his upcoming film, ?Our Brand Is Crisis?. He praised the business tycoon, saying, ?I mean, first that?ll be the best party ever when he won, and second, Trump?s an easy sell.?

He went on explaining, ?When you look at Trump, he?s an easy sell because you can sell him as the guy who worked his way up from nothing. And I think if you?re a ?pull yourself up by your bootstraps? candidate, people would identify with that.? The actor added, ?I?m on the bandwagon. I?m drinking the Kool-Aid!?

His followers on Twitter were quick to criticize him. ?I don?t think #AnthonyMackie knows where the whole ?drinking the kool-Aid? metaphor came from. Might want to look that up,? one follower wrote. Another commented, ?Anthony Mackie supports Donald Trump. Anthony Mackie CANCELLED.?

Mackie later clarified on Twitter that he was only joking. ?Sorry Donald, that wasn?t an endorsement. Just a bad attempt at a joke, I guess?? he wrote. But it was too late, many of his fans took it seriously. ?So now #AnthonyMackie says it was a joke. In other words his agent called and said he needed to walk that shit back?? a Twitter user wrote.