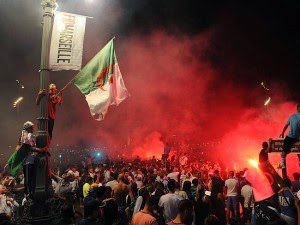 Clashes between anti-shale gas protesters and police have spread on Sunday to the province of Tamanrasset, 2,000 km south of Algiers, a local source told Xinhua. The clashes, which erupted Saturday in the locality of In-Salah, 1,270 km south of Algiers, have so far left 90 injured, including 31 men among anti-riot troops, according to a security source.
Meanwhile, 11 people arrested Saturday for public disorder and vandalism acts were released, while 12 others are still detained, the source added.
For nearly two months, anti-shale gas activists have been staging demonstrations near a plant where a multinational company conducts tests to measure the Algerian shale gas potential.
Activists say the exploration of shale gas will have disastrous impact on groundwater and environment in general.
However, the government has been reassuring angry population and environment activists that the current tests are taken for determining accurately the country’s shale gas reserves and no drilling operation is scheduled before 2022. Enditem

Russia in Favor of Algeria’s Accession to BRICS – Ambassador