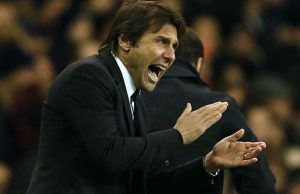 Chelsea manager, Antonio Conte, has urged his players to accept defeat to “a great team”, after they were beaten 2-0 by Tottenham on Wednesday night.

The loss brought an end to their 13-game winning streak.

“We knew that this could happen before now,” Conte told Sky Sports after the match.

“I think I saw a game with a good balance. They scored a goal at the end of the first half and then they scored the second goal in our best moment.

“It’s a pity to stop this run but Tottenham is a good team, a really strong team and I think for sure they are one of the teams who can fight for the title until the end.

“They fought last season and for sure Tottenham can fight also this year.

“Two good teams with good intensity and good pressure tried to win the game. Tottenham scored in two strange moments [especially in] the second half when we missed two chances to equalise.”

Conte also claimed he cannot blame his defence, until he sees replays of the goals they conceded.

“I didn’t see the [replay of] of the situation but, for sure, I saw a good cross and a good header. With the team we will see,” he added.

“My team, we are at the top of the table because we are working a lot and I think that from last season we improved a lot.

“But for sure this championship is very tough and for this reason it is important to work and continue to improve.

“It can happen, a defeat against Tottenham.

“Now it is important to restart. After 13 wins in a row it is difficult to accept a defeat but this is football and we must accept and remember our defeat arrived with a great team.”