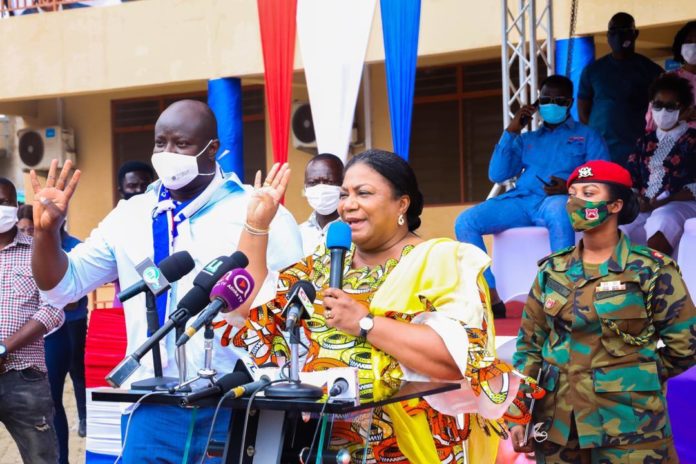 Residents of Anyaa-Sowutuom in the Ga Central Municipality on Wednesday gave the First Lady, Mrs Rebecca Akufo-Addo, a rousing welcome as she toured parts of the Constituency to canvass for votes for the New Patriotic Party (NPP).

Mrs Akufo-Addo waved and showed gratitude to the crowd, especially traders at Ablekuma, the Chantan and Anyaa markets as well as people who stood along the streets to catch a glimpse of her.

She thanked the people of Constituency, known to be a stronghold of the Party, for keeping faith with the NPP over the years.

She said her visit was to interact with them to know their needs and to convey same to the President for the necessary action.

At the Chantan Market, she urged the women to vote for President Akufo-Addo “for four more years to do more”.

She said the President was poised to embarking on more infrastructure projects including roads to improve the lots of the people, especially women and children.

The First Lady gave the assurance that a new well-fitted market would soon be built for the traders at Chantan so they could ply their trade in a conducive environment.

At the Anyaa market, a durbar of chiefs and people held in her honour turned into a mini rally, as many party faithful went agog cheering the First Lady and her entourage to victory in the December elections.

Mrs Akufo-Addo reminded the people of the many developmental projects undertaken by the Government, led by President Akufo-Addo, including the one district one factory, one district one ambulance, and the Free Senior High School implementation.

She appealed to them to endeavour to go to the polls in December to vote massively for the NPP to renew the President’s mandate for another term and elect Dr Kissi as the Member of Parliament.

She later donated some medical items to the Ga Central Municipal Hospital.