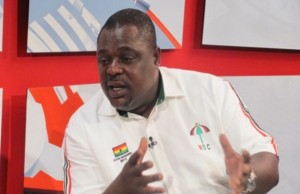 According to him, since the President was sworn into office he has been trying to hype the late Dr J.B Dankwa who contributed nothing to the development of this country.

Three men in the Volta region were arrested and charged with treason with the possibility of facing death penalty if they are convicted.

The group has been advocating for the restoration of the Western Togoland which they claim stretches from parts of the Northern region, Upper East, Volta region down to the Gulf of Guinea.

Speaking with Kasapa News’ Akwasi Nsiah, Mr Anyidoho indicated that, they are not separating from Ghana as earlier reported but want the world to know their contribution towards the development of this nation.

He said, it will be better for the President to stop giving the unnecessary hype to Dr J.B Dankwa who did not play any role in the struggle of the country’s independence.

Mr Anyidoho questioned if the laws of the country are against freedom of association saying the Separatist called Homeland study group foundation cannot be described as illegal and that they are only trying to tell and write the history of Ghana.

‘We are observing to know the outcome of this, Ghana belongs to all of us, the court said they cannot be charged with treason as proffered by the police. What offence have they committed by joining a group?. I as a Voltarian, am observing with keen interest. But that group cannot be called secessionist its not an illegal group. The President mentioned J.B Danquah’s name throughout his speech during independence day celebration. What was the role of J.B Danquah in the attainment of Ghana’s independence?, the President downplayed the role of Dr Kwame Nkrumah and praised J.B Danquah instead, that is the why the group also want to re-write history. What is wrong in this step they are taking.

If there is a President who wants to pursue Kyebi supremacy agenda and impose J.B Danquah on us, then its important Voltarians also look into their history and see where they are coming from,’ he fumed.

According to him, Voltarians are part of Ghana and will continue to be with a voice.

He reiterated that the group is not asking for secessionism as speculated by a section of the public.