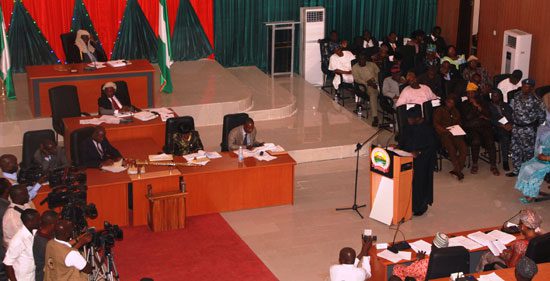 Despite plea by prominent Ekiti people, including traditional rulers and religious leaders?that the All Progressives Congress (APC) leader, Bola Tinubu and former governor of Ekiti State,? Dr Kayode Fayemi should let peace reign in the State,? APC lawmakers with some of the party leaders again met in a Hotel in Akure yesterday on how to frustrate the new government of Governor Ayodele Fayose through the House of Assembly.

The APC lawmakers were said to be adamant on their plan to either impeach Governor Fayose or make the State ungovernable for him.

The Ekiti Movement for Good Governance (EMGG), in a statement by by its Secretary, Dr Abiodun Aina, said Ekiti people will resist any attempt to prevent Fayose from governing the State for the four years tenure that he was elected to govern Ekiti State.

Dr Aina who said owner of the Hotel where the clandestine meeting was held last night confirmed that the APC lawmakers slept in the Hotel and left early today, added that the lawmakers ran to Akure to hold the meeting because they knew that they were working against Ekiti people.

A leader of the APC,? who came from Lagos was said to have assured the lawmakers of enough fund to prosecute the agenda tagged; ?Operation Blockade.?

Apart from using the House of Assembly to frustrate Fayose?s Government,? part of the agenda of the Operation Blockade was to step up criminal activities like armed robbery and kidnapping in the State.