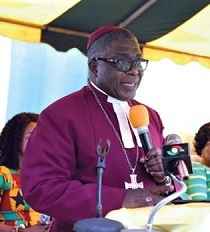 The Most Dr Reverend Paul Kwabena Boafo, Chairman, Christian Council of Ghana, has welcomed the apology of the rioting students to the Government and commended the intervention of the President for leniency.

He said the plea of some of the parents of the West Africa Senior School Certificate Examination (WASSCE) candidates as seen in some video footages in circulation was also welcoming.

“That is what we were asking for, ” he told the Ghana News Agency in an interview on Monday.

Most Rev Boafo, also the Presiding Bishop Methodist Church of Ghana, said the Ghana Education Service’s swift application of its rules and regulations by dismissing the affected students was also in order and it would deter other students.

“And so the President’s intervention, not to disallow the students from writing the examinations is a show of a father who have listened to the apologies that have come in.

“The President coming in to as it were, plead on behalf of the students” resonate a father’s love for his children, as he put it, everyone deserves a second chance, and so, that is ok”.

“If it is a genuine apology they have put in, then we need to forgive them”, Most Rev Boafo said.

“Biblically, when the prodigal son realised that what he did was not right, he came back and his father readily accepted, welcomed and entertained him-that is what I think the President is doing, ” Most Rev Boafo, explained.

Meanwhile, the Christian Council Chairman had advised the Ghanaian-adult to set good examples for children to emulate, adding that, parents had much responsibility to teach the children the right way to live.

He said society, had a role to play in nurturing the upcoming generations, saying that the rot in society, especially among the youth was a matter of concern.

He called for multi-functional efforts by all, at the school level, the parental level, the church, and the state levels “for all us to look at it, and address it through a concerted campaign”.

Most Rev Boafo said, “You see politicians insulting themselves on radio and the children see all these. It seemed the good things are drowned, and the bad things are rather seen as normal, which should not be”.

“So all of us must put our shoulders to the wheel, so that if your child comes home and is misbehaving, that is where you as a parent has to come in and correct him. When they go to school, teachers are also to play their part. . Then as adults, we also have to play our part by exhibiting good values of respect for one another. ”

He asked q young people to have a listening ear to the good advice of their parents so that they could become better adults. “Otherwise, we are bound to suffer”.

Most Rev Boafo also urged Ghanaians not to politicise every issue but rather, should look at them critically and address them more appropriately.