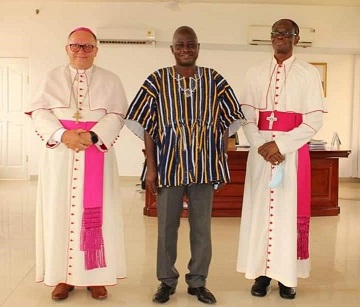 The Most Reverend Henryk Mieczyslaw Jagodzinski, the Apostolic Nuncio to Ghana, has extended the blessings and greetings of the Holy Father, Pope Francis to the Upper East Region, on the occasion of the centenary celebration of the Catholic Minor Basilica in Navrongo.

The felicitations, through the Upper East Regional Minister, Mr Stephen Yakubu, said: “He sends the assurance of his prayer and his spiritual nearness to all of you the public servants who are working for the betterment of Ghana and her people, especially in facing the present challenges of our time.”

“I am very pleased to visit your beautiful Region, which is particularly known for its rich culture, farmers, livestock, and beautiful handicrafts, host to many festivals throughout the year, and for having the world’s friendliest crocodiles.”

He said the Upper East Region was the home to various places of culture and history in different aspects, political, sociological, cultural, and religious in nature.

The Most Rev. Jagodzinski indicated that he was in the Region, specifically, in the Diocese of Navrongo-Bolgatanga,the to honour the “Centenary Celebration of the building of God’s dwelling place”, in Navrongo, Kassena Nankana Municipality.

He said the Upper East Region, particularly the Navrongo-Bolgatanga Diocese could be described as the cradle of Catholicism in the North, “It dates back to April 1906 when two African Missionary Fathers and a Brother who were known as White Fathers, planted the seed of Catholicism in Navrongo.

“They then built a Chapel, and now it is known as the Minor Basilica of Our Lady of Seven Sorrows. The Catholic Church in the North is celebrating the 115 years of the implantation of the seed of Catholicism in Navrongo and the Centenary of the Minor Basilica.”

The Apostolic Nuncio expressed gratitude to Most Rev. Alfred Agyenta, the Bishop of the Navrongo-Bolgatanga Diocese for the invitation extended to him to be part of the Centenary Celebration.

Most Rev. Jagodzinski thanked the Regional Coordinating Council led by the Minister for the cordial collaboration with the Catholic Church.

Mr Yakubu acknowledged the contributions of the Catholic Church in the Region and beyond in various sectors of the country, especially in the education and health sectors apart from building the moral uprightness of Catholics in the Region.

The climax of the “Centenary Celebration of the building of God’s dwelling place,” scheduled to come off on September 18, 2021, is on the theme: “100 years of existence of the Church of the Minor Basilica, celebrating our membership of the household of God (Eph 2, 19)”

President Nana Addo Dankwa Akufo-Addo is expected to be the special guest of honour.