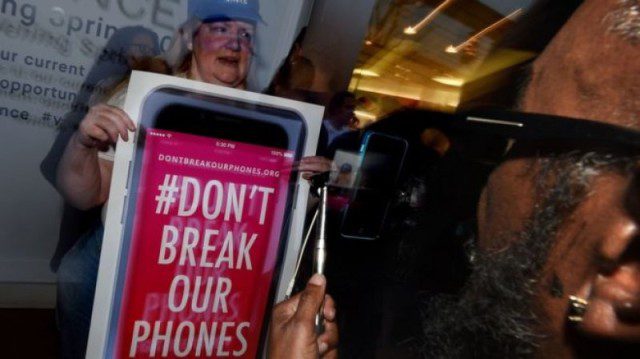 Apple has asked a US court to overturn an earlier ruling ordering the company to help the FBI break into a phone used by one of the San Bernardino killers.

The FBI and White House have said the request is limited to one iPhone.

But Apple says the software needed to comply with the FBI’s request “simply does not exist”.

Instead Apple says it would have to create a new version on the iPhone operating software, containing a back door to the device’s encrypted data.

It argues that the lower court did not have the authority to force Apple to do that.

Apple also says no court had ever forced a company to weaken the security of its products to gain access to personal individual information.

“This case is about the Department of Justice and the FBI seeking through the courts a dangerous power that Congress and the American people have withheld,” the filing said.

On Thursday FBI director James Comey, said the government’s dispute with Apple was, “the hardest” he had faced in government.

Testifying before congress Mr Comey said: “This is the hardest question I have seen in government and it’s going to require negotiation and conversation.”

The row between Apple and the FBI blew up last week when the bureau asked the electronics firm for help to unlock the smartphone of Syed Rizwan Farook – who along with his wife killed 14 people in December 2015.

So far, Apple has refused to unlock the phone.

In an interview aired yesterday with US TV network ABC, Apple boss Tim Cook said the FBI was asking it to make “the software equivalent of cancer”.

Apple has argued that the FBI’s request violates its constitutional right to freedom of speech, because a 1999 court case ruled that computer code is considered speech.

By forcing Apple to create a new code the FBI was violating a constitutional right, the company said.

Apple’s attorney, Bruce Sewell will testify before Congress on 1 March about the encryption case.

Tech leaders, including Google’s boss, and Apple customers have praised the company for standing up to the FBI.

Apple supporters rallied in front of the company’s stores on Tuesday to show their support.

A Department of Justice court filing from February accused Apple of refusing to help to boost its “marketing strategy”.