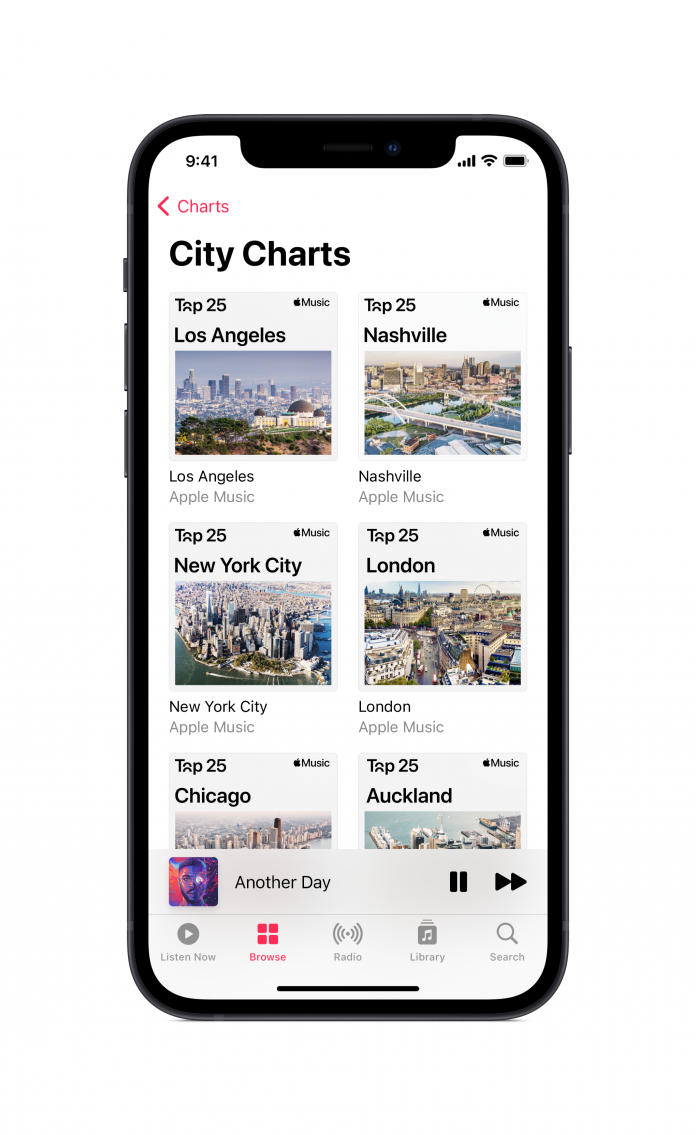 Apple Music will unveil City Charts today, becoming one of the first streaming platforms to spotlight the music making waves in over 100 cities around the world.

While standard charts rank music based simply on number of plays, Apple Music’s City Charts combine plays and additional signs of local popularity to rank the top 25 songs gaining momentum with listeners locally, truly highlighting the local culture and individual music scenes of the cities they represent. With City Charts, Apple Music brings both global and local artists to the forefront of a new destination for music discovery.

Updated daily, City Charts are featured in Apple Music’s Charts page and are accessible via the Browse or Search pages, or by asking Siri to play a local city chart – for Lagos’ chart, simply say “Hey Siri, play the Top 25: Lagos.” Users can also add their favorite City Charts to their library, download them and share them with friends.

City Charts are the latest addition to Apple Music’s exceptional range of chart offerings, which includes its Daily Top 100: Global and for 116 countries; album, top songs and music video charts in various genres; as well as the iTunes, Shazam Discovery Top 50, and Shazam’s Top 200’s, Discovery, Cities and Genre charts in its portfolio. With this leading variety of charts, Apple Music is uniquely positioned to capture the zeitgeist of music and reflect what’s truly popular around the world.

Apple Music’s Daily Top 100 charts have become one of the most streamed playlists categories on platform since launch, with more than 4,000 songs from over 2,200 artists across 130+ genres reaching No. 1 on one or more of these.

Motion for Artist Detail Pages: Artists can now bring their personality to life in Apple Music by adding their own moving images to artist detail pages.

Lyrics Sharing: Share your favorite lyrics using Messages, Facebook and Instagram stories. Lyrics link back to the exact moment in the song and subscribers can play the snippet in Messages without leaving the conversation.

Record Label Pages: Dive into the latest and most popular releases from hundreds of record labels.
Search for Record Labels: Search now shows Record Labels in Suggestions and Top Results for relevant searches. You can also use the new Record Labels filter to refine your results and find exactly what you’re looking for.

Explore other albums from your favorite labels: Albums released from selected labels now have a link to the Record Label page just below the track list.

Library Made for You: Apple Music makes it even easier to find your personal mixes and Replay playlists with a “Made For You” library shortcut.

Latin America and the Caribbean