The Members of Terabuuriyele have expressed worry over the manner in which the Ghana Education Service has refused to grant their demand of making Gurene language an examinable in the Basic Education Certificate Examination (BECE).

Speaking at the national launch of Terabuuriyele in Accra, Prof Avea Nsoh, the Principal of the College of Languages Education, University of Education, Winneba, stated unequivocally that the Gurene language has met all the criteria for it to be approved by the Ghana Education Service and the Ministry of Education. This he said, yet all effort to press home their demand has proved futile.

“We are calling on Ghana Education Service and the Ministry of Education to approve our request for the Gurene language to be used in the next academic year,” he demanded.

He also entreated all parents to strengthen the bond with their kids by teaching them about their values and culture, and also by speaking their local language to them. “Don’t be a wicked father. Speak your language to them. Don’t denied them the language,” Prof stated.

You will see Gurene or Frafra man instead of him speaking his language to his fellow man he would rather choose to speak different language.

The Chief of Ablekuma Joma, Gbawe, Gonse, Sarki Musa Nsoh, also added his voice to the call by appealing to Ghana Education Service to endeavour to approve their request for Gurene language to be made an examinable.
According to him, the main reason for the formation of the organization is to foster unity among the people of the north especially in the Upper East Region.

“There are reports victims of ‘Institutionalized envy’ and pull-down plots (PDP) whose achievements have been so baldly crushed hope of recovery is very slight.

And among such victims are those who tend to shift focus to develop south to explore new environments.
“I want to call on individuals and groups who are in the habit of pulling down determined and successful people in Ghana’s northernmost regions to stop it now,” he cautioned.

The Chief also, seized the opportunity to appeal to President Akuffo Addo and his government to endeavor to work on the deplorable state of the road network in the region.

The Bolgatanga Municipal Chief Executive has done well by working on the potholes and I must commend him for that, but I think we need new roads that befit a capital town of a region,” he added.

Tere-buure yele was an idea couched by the founder Naba Musa Nsor backed by Hon. Thomas Adongo Abotibala and Madam Diana Akapiniba aka. Lady D on the 22nd of March 2017 following due registration processes on the 6th of June 2017. 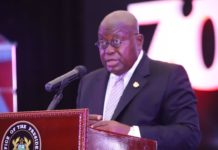