All is set for the maiden edition of the Rush Western Region Music Awards Ceremony which is expected to take place on Saturday 29th April, 2017 at the Plush Best Western Atlantic Hotel in Takoradi of the Western Region. 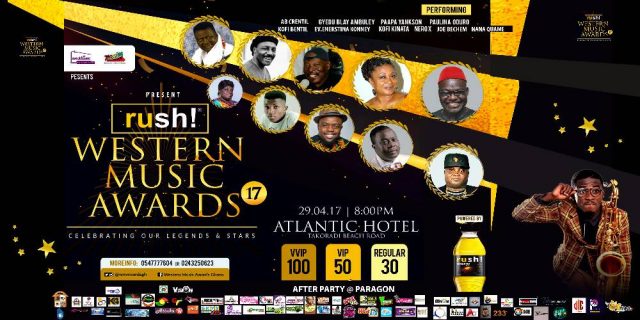 The event, according to the organisers and promoters Westline Entertainment in partnership with the Musicians Union of Ghana (MUSIGA) is aimed at honouring hard work, quality works of Western Region Artistes and those who have taken music beyond the borders of the most naturally endowed region in Ghana.

In a release issued and signed by the Public Relations Officer (PRO) of the Rush Western Region Music Awards, Nana Kwesi Coomson stated that over seventy-two (72) Artistes from the Western Region have been nominated in various categories for the awards.

“So far the participation from both Artistes and their fans is encouraging. Just like any awards, we had our fair share of criticisms and commendations when the nominations list came out. The statement added.

“We entreated every Westerner to be a participant and not an onlooker and we are getting exactly that; critiques, criticisms and commendations.”

He expressed satisfaction over the overwhelming patronage by the general public for voting massively for their preferred artistes and urged them continue voting to (1761) to increase the chances of their favorites.

“The love for the Western Artistes is amazing. Day in and day out, there is an impressive number of voters in the various categories. The fans are rallying behind their Artistes to win big” the Organizers said.