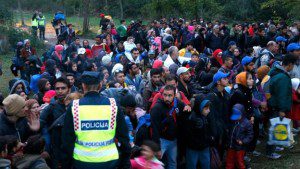 VIENNA — The Austrian government is to extend its border management system to control the influx of migrants to a further four sites by June 1, the Austria Press Agency(APA) reported on Thursday, citing the Interior Ministry.

The system has already been in place at the Spielfeld site bordering Slovenia. It will be implemented in Nickelsdorf and Heiligenkreuz im Lafnitztal in the state of Burgenland, both of which borders Hungary, as well as at the Brenner in Tyrol and Thoerl-Maglern in Carinthia, which border Italy. (Austria-Border Control)
– – – –
WASHINGTON — Commander of U.S. Africa Command said on Thursday the Islamic State (IS) had doubled its presence inside Libya in the past 12 to 18 months.

“In Libya, the U.S. intelligence community has said it’s around 4 (thousand) to 6,000. It is probably about doubled in the last 12 to 18 months based on what their assessments were last year,” said Army Gen. David Rodriguez here at a Pentagon briefing. (U.S.-IS)
– – – –
UNITED NATIONS — The UN special envoy for Syria said on Thursday he expected intra-Syrian talks to resume on April 13 in Geneva in a bid to seek a political solution to the Syria crisis, a UN spokesman said here.

Envoy Staffan de Mistura “wanted to ensure that the talks will start a political process leading to a real political transition,” Farhan Haq, the deputy UN spokesman, said at a daily news briefing here. (UN-Syria)
– – – –
ST. PETERSBURG, Russia — Russia will continue to support a peaceful solution to the current conflict in Nagorno-Karabakh between Armenia and Azerbaijan, the Kremlin said here Thursday.

“Of course, at this time, at various levels, a lot of work has been carried out in order to stop the fire … Moscow will continue its same policy,” Russian presidential spokesman Dmitry Peskov told reporters.(Russia-Nagorno-Karabakh) Enditem