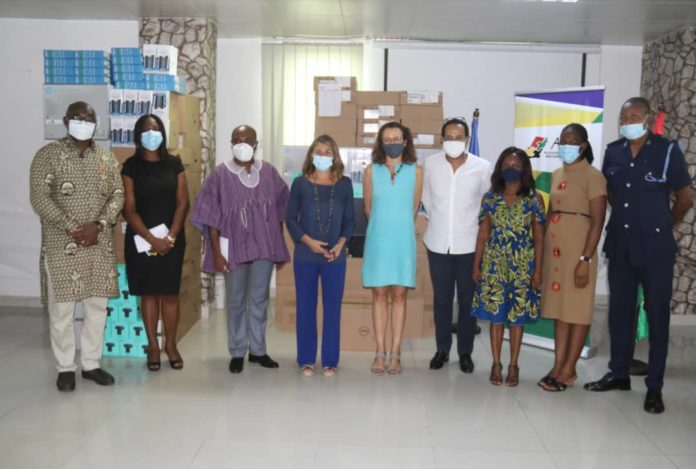 The Accountability, Rule of Law and Anti-corruption Programme (ARAP), an EU-funded programme, implemented by the Spanish public foundation FIIAPP have presented electronic and multimedia equipment to four national stakeholder institutions.

The institutions are the Attorney General Office, the Ghana Police Service, the Economic and Organized Crime Organisation (EOCO) and the Environmental Protection Agency (EPA).

A statement issued in Accra by the EU ad copied to the Ghana News Agency said the intervention aimed to support the Attorney General Office with 10 printers, 15 routers, 22 Desktop computers and 22 Dock Station for the Solicitor General and the Directorate of Public Prosecutions (DPP).

It said Solicitor General (SG) would roll out the Solicitor General Platform (a digital platform created under the ARAP Programme), whose main function would be to administer and manage all civil case dockets that the SG office to be received from the Attorney General Office.

The statement said the DPP would use and develop the digital register Docket System created under the programme.

The main function of the electronic case docket the system is to administer and manage all criminal case dockets that the DPP receives from other investigative agencies such as Ghana Police and the EOCO.

It said the equipment for the Ghana Police Service consisted of 20 desktops computers, 20 Dock Station, 13 printers and 2 routers that would support the Police Professional Standards Bureau (PPSB) and the GPS Legal Unit Department.

The statement said the PPSB would use it for its Petition Management System (PMS) that was designed to incorporate digitally the work processes, books, registries and forms used by personnel of the Police Professional Standards Bureau in the course of their duties.

“Consequently, the system ensures the immediate availability of relevant system-generated reports on the status of PPSB activities and therefore allows adequate monitoring by relevant PPSB stakeholders,” it added.

It said explained that the GPS Legal Unit would use it to support the implementation of the evidence declassification process digitally.

“The donated devices will help to strengthen the work of the above-mentioned institutions in Ghana, and enable them to ensure the continuity of their activities, “it added.

It said the ARAP remained a proud partner of these national stakeholder institutions to double up their efforts to ensure effective rule of law, accountable institutions and healthy state-society relations.