Australian archaeologists have discovered the 2-million-year-old skull of a large-toothed, small-brained human “cousin species” in an ancient cave in South Africa.

The skull fossil from the Drimolen archaeological site near Johannesburg is the world’s oldest and best preserved male Paranthropus robustus.

The researchers argue that the specimen “provides the first high resolution evidence for microevolution within an early hominin species.”

The findings, published in “Nature Ecology & Evolution” Tuesday, show how environmental change determined who from our lineage survived.

“Like all other creatures on earth, to remain successful our ancestors adapted and evolved in accordance with the landscape and environment around them,” said Andy Herries, head of La Trobe’s Department of Archaeology and History.

“We believe these changes took place during a time when South Africa was drying out, leading to the extinction of a number of contemporaneous mammal species.”

Angeline Leece, co-lead author on the paper, said it was important to know that Paranthropus robustus appeared at roughly the same time as our direct ancestor Homo erectus but they are “two vastly different species.”

While we were the lineage that won out in the end, the fossil records suggest that 2 million years ago Paranthropus robustus was much more common on the landscape. 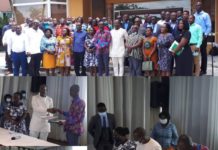