The book, titled ‘Changes: The Dawn Of A Revolution’, which provides an illustrative history of Jerry John Rawlings leadership, vividly depicted how Rawlings broke out of custody on June 4th, 1979, to lead a popular revolt, which redirected Ghana’s political and socio-economic destiny.

Professor Addo during the launch of the book at Sogakope, said the immense contributions of the late military man to the development of Ghana must not be forgotten, hence the need for the book to be owned by everybody.

He said the illustrated nature of the book makes it easy to read.

“The significance of this book lies in its graphic character to the extent that persons who cannot read and write can see and understand the events that unfolded during that period in Ghana’s history,” he said.

The book, does not only convey the part played in Ghana’s June 4th Revolution by J.J Rawlings, but further draws attention with background information which enhances his personality as a charismatic and heroic figure.

He suggested the book should be included in the schools’ curriculum because of its rich historic details.

The event was attended by Mr Henry Ametepe, the Volta Regional Chairman of the National Democratic Congress, Mr James Gunu, the Regional Secretary and some Constituency Executives of the NDC in the South Tongu District as well as other dignitaries from the academia. 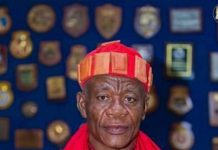