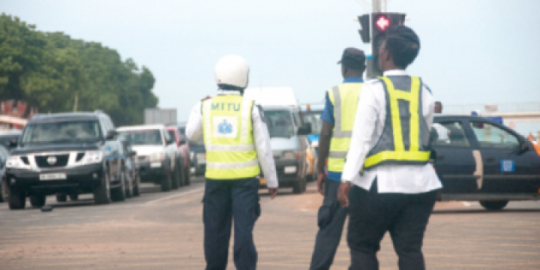 A GNA Feature by Francis Ameyibor

Suicide drivers have hit Ghana’s major roads including the motorway, highways and other inner city roads killing hundreds of people, we must therefore work together to disarm them as the road accident fatality rate is on the increase.

Suicide drivers can be identified on the road through their careless driving antics, level of speeding, disregard for road safety regulations, usage of mobile or electronic devices while driving, and the lack of concentration on the road.

While a suicide pedestrian is associated with care-free attitude, absent mindedness, using mobile phone or other devices and failure to adhere to safety mechanisms while crossing the road.

Are you therefore a suicide driver or suicide pedestrian?

According to Wikipedia, the free encyclopedia: A suicide mission is a task which is so dangerous for the people involved that they are not expected to survive. The term is sometimes extended to include suicide attacks; whose perpetrators actively commit suicide during execution of the mission.

The risks involved with suicide missions are not always apparent to those participating in them, so is the Ghanaians suicide driver who most often fail to appreciate the dangers involved in the way they drive or how careless they are about the consequences of their behaviours.

According to statistics, a total of 2,589 people were killed in road traffic crashes last year compared to the 2,284 killed in 2019, which means about 216 people were killed monthly, which translate into about 54 being killed every week. This figure surpasses any epidemic which has ever hit this country including the COVID-19 pandemic, this calls of radical attitudinal change.

According to the data compiled by the Motor Traffic and Transport Department (MTTD) of the Ghana Police Service, 2,117 males, comprising 1,921 above 18 years and 196 below 18 years, were killed in road crashes in 2020. On the other hand, 472 females, made up of 342 above 18 years and 130 below 18 years, also lost their lives during the period.
Ghanaian men must learn something from the women largely when it comes to driving, women must also begin to daily remind their husbands, boyfriends, fathers, and their male counterparts at work not to be involved in any suicide driving mission.

The data however indicated a decrease in pedestrian knockdowns from 2,983 in 2019 to 2,728 last year and the number killed dropped from 740 in 2019 to 720 last year, representing an 8.65 per cent reduction, even though the drop is significant, it is not enough as every life matter. We must work towards zero fatality, let us stop the suicide pedestrians.

MOTORCYCLES TOP DEATHS
The 1,056 commuters killed by motorcycles are higher than the 964 killed by commercial vehicles, and it is also almost double the 569 killed by private vehicles in road traffic crashes.

GNA-TEMA AND MTTD ROAD SAFETY CAMPAIGN
The Tema MTTD has called for attitudinal change on the road in order to reduce accidents, “most road accidents are purely human induced act”.

The MTTD has observed total carelessness on the road, people drive or cross the road without any senses of responsibility, “we cannot continue to use the road without adhering to road safety regulations. This must stop”.

The GNA-Tema and MTTD Road Safety Project seeks to actively create consistent and systematic weekly awareness advocacy on the need to be cautious on the road as a user, educate all road users of their respective responsibilities, and sensitize drivers especially of the tenets of road safety regulations, rules and laws.

MOTORBIKE RIDERS: MAJOR NUISANCE ON THE ROAD
Sgt. Timinka also cited motorbike riders as major nuisance on the road even though they are equally road users and have equal rights. “Some ride with careless impunity”.

He however reminded the driving public that motorbike riders also have equally assess and usage of the roads as other drivers.

“It is erroneous to conclude that simply constructing speed ramps would automatically reduce speed and road accidents, on the contrarily, such illegal speed ramps which constitute unnecessary traffic obstruction have contributed to accidents in those communities.

“These illegal speed ramps are poorly constructed, without any warning signage to the approaching vehicle, this is dangerous and a criminal act,” Sgt. Timinka stated.

“If there was any form of accident in a particular jurisdiction, the community members quickly mobilise, construct speed ramps of no standard out of anger to prevent accidents.

“So they end up putting sticks, anchor ropes, blocks, stones among others on or in the road to stop speeding and accidents. But this act is rather dangerous.

“In as much as we have to reduce speed, we also do not need to inconvenient someone using the road or get involved in acts of illegality,” he said.

UNTHEORIZED OBSTRUCTION CONTRIBUTES TO ACCIDENTS
Sgt. Timinka said any act of obstruction contributes to accidents, “let us desist from the creation of unauthorized speed ramps in our communities”.

According to him, Section 22 of the Road Traffic Regulation Act 2012: “a person commits an offence if without lawful authority or reasonable excuse that person causes anything to be on or over the road.

“Interferes with motor vehicle, trailer or cycle, obstructs direct or indirectly with any traffic equipment in such circumstance it will be obvious to a reasonable person that to do so would be dangerous”.

He entreated the various Assembly members and the committee leaders to talk to their people about these illegal speed ramps construction, as it is endangering the same lives they are trying to protect.

He advised communities to go through the right channels if they wanted speed ramps to be constructed for them in order to have approved ones with signage.

He also assigned the increment of road crashes to people not adhering to speed limits, not crossing the roads at appropriate places, the use of communication devices among others, while using the roads.

He said the surge in the number of road crashes was worrying and urged that drivers should be disciplined while using the roads to bring sanity on the roads.

He added that decisive approach was needed to tackle road crashes and appealed for support from stakeholders to prevent needless deaths on the roads.

According to the Regional Police Command, it has observed that long and slow moving vehicles drive on the inner lane of the motorway, creating unnecessary and avoidable traffic.

He said ironically, most of the erring drivers were those with many years of driving experience and holding higher categories of drivers’ licences, stressing that the inner lane of the motorway was for fast moving and overtaking vehicles, to avoid traffic on the road.

The phenomenon, if not stopped, has the propensity to contribute to some of the road crashes and traffic congestion on the motorway.

COMPLY WITH THE GHANA HIGHWAY CODE

“The general public especially, users of the motorway are accordingly advised to comply with the Ghana Highway Code of 1974, and Rules of the Road as stipulated by Regulation 106 of L.I. 2180, of 2012,” Supt. Out Acheampong stated.

Supt. Otuo Acheampong, said the improper usage of the motorway and other highways by motorists especially heavy duty vehicle drivers was of concern and pleaded with drivers to use the outer lanes to avoid any road crashes.

The Tema-GNA therefore urged all stakeholders to join forces and work together to create awareness about the activities of suicide drivers and suicide pedestrians on our roads as their actions may affect you or your loved one someday, so let us stop them.