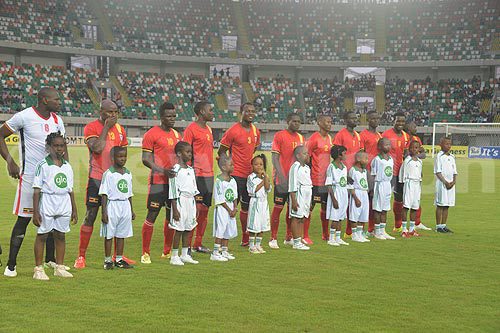 Cranes are supposed to be harmless birds. They are not as devastating as Eagles are with prey. They do not even feed on fellow birds. It?s this that must have shocked the Eagles on Wednesday evening.

In fact word from Nigeria, is that the Super Eagles have become the Super Chickens following Farouk Miya?s decisive goal at the Akwa Ibom Stadium in Uyo.

But as we continue to celebrate the historic win, it?s imperative to note that the game highlighted positives and concerns that need reviewing before the qualifiers start in June.

We?ll look to the positives first.

When the Cranes squad was announced for this game, the likes of John Nsubuga, Shafik Bakiki, Keziron Kizito and Derrick Tekkwo were non entities.

If they were going to have an impact in the game, it was expected more off the bench.

However considering the late withdrawals of Isaac Isinde, Denis Iguma and absence of several other first team stars such as Geoffrey Kizito, Tony Mawejje and Moses Oloya the three were handed very unlikely debutes.

Every minute the four players spent playing against the star-studded side was time well-spent growing in confidence.

Denis Onyango is a true leader

If there was a player that deserved the team?s armband ahead of the upcoming qualifiers, it had to be Onyango.

Onyango has improved tremendously over the last six months.

Onyango is highly regarded for his outstanding concentration and shot stopping abilities.

He organises and commands the defence well. He also contributes to the team?s attacking play with good ball distribution ?three aspects that were evident against Nigeria on Wednesday ? aspects that literally provided Cranes with the right platform for the victory.

Cranes lined up in a 4-5-1 formation (with a five-man midfield that had two defensive midfielders, including left-back Walusimbi) and that restricted their offensive approach against a new-look Nigerian defence.

It?s after Micho Sredojevic switched to a 4-4-2, with Robert Ssentongo joining Geoffrey Massa that Cranes finally found the breakthrough.

Clearly, the team had been set out to defend rather than attack. The team was more concerned about not losing the ball, than trying to find a teammate in the areas of the pitch that mattered.

As a result, it invited Nigeria into Cranes own half and exposing Onyango on countless occasions.

Friendlies are about being positive ?they are an opportunity of trying out formations that will earn you that precious away win ?a prerequisite for any side that intends to qualify.

It?s always important to keep the ball and try to make the opponent tired. But then again, it?s not advisable to always take the easy option of keeping the ball by playing too many back passes to the keeper. At one stage of the game, you will be exposed.

Cranes almost paid the price when Richard Kasagga?s back pass took a wrong turn and forced Onyango into an avoidable challenge on Ahmed Musa.

When coaches ask players to hold onto possession during a game, it?s usually because they are expected to wait for the right moment before releasing it.

In Uyo, Cranes tried to keep possession. They were disciplined and compact in midfield.

That ensured that the anticipated Nigerian threat from the wings never really materialised. But there were moments when Cranes had the ball and still felt insecure and gave the ball away easily or hacked it forward without purpose.

Cranes technical staff will need to devise ways to resolve this before the qualifiers start in June.