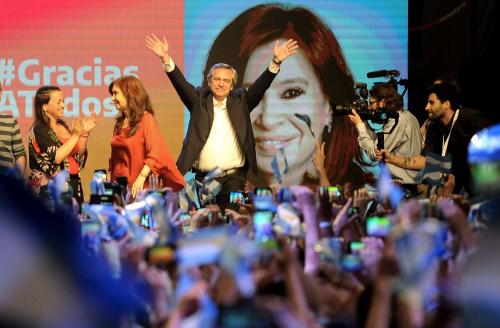 Argentines voted center-left candidate Alberto Fernandez their next president and in doing so ousted center-right incumbent Mauricio Macri and his austerity moves during the country’s economic recession.

With more than 95 percent of the ballots counted Sunday night, Fernandez won with 48 percent of the vote to Macri’s 40 percent, according to the National Electoral Directorate.

“We’re going to build the Argentina we deserve,” Fernandez told his supporters. “It’s not the case that we are condemned to the present Argentina.”

Macri, at his campaign headquarters, said he spoke with Fernandez on his election victory.

“I congratulated Fernandez and invited him to talk so that we could have an organized transition,” he said. “The important thing is the future of all Argentinians.”

Fernandez will take over as president on Dec. 10.

He said he would meet with Macri Monday and that he will cooperate with him “in everything that Argentines need.”
“Argentines must know that any commitment I made is an ethical commitment,” he said. “We are going to build a solidarity and egalitarian Argentina that everybody dreams.”

According to the National Electoral Directorate, over 80 percent of eligible voters turned out Sunday for the election that will determine the country’s trajectory over the next four years amid a deepening recession that saw inflation increase by more than 50 percent on-year.

After Fernandez’s victory was called, the Central Bank of the Argentine Republic tightened the restraints on U.S. dollar purchases to $200 a month for those with a bank account and $100 in cash compared to $10,000 established in September.

The measure is set until December, the bank’s board of directors said in a statement.

“Given the current degree of uncertainty, the Board of Directors of BCRA decided to take a series of measures this Sunday that seek to preserve the reserves of the central bank,” the board said.