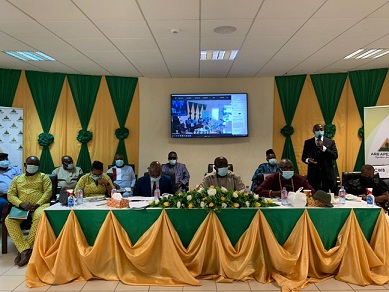 The Association of Rural Bank (ARB) Apex Bank Limited has put up an impressive performance, increasing its total operating income by 1 per cent from GHS64.96 million in 2019 to GHS75.3 million in 2020.

Profit before tax soared by a whopping 482 per cent from GHS1.0 million in the previous year to GHS5.9 million.

Dr Anthony Aubynn, Board Chairman, ARB Apex Bank Limited, speaking at the 19th Annual General Meeting of the Bank in Accra, said the sharp growth was mainly due to growth in deposits.

The Board Chairman said the Bank continued to invest heavily in infrastructure to support the smooth running of Rural and Community Banks (RCBs).

He said besides the US$8.0 million funding from the Ministry of Finance and World Bank, the Board recently approved an additional US$1.2 million to support the upgrade of the Data Centre and the Disaster Recovery site to avert any interruption in the operations of our RCBs.

Dr Aubynn said the rural banking sub-sector recorded some significant improvements in the year under review with total assets growing by 33.3 per cent year-on-year from GHS4.2 billion to GHS5.6 billion at the end of September 2020.

The Board Chairman said the RCBs still had significant amount of money locked up with some Securities and Exchange Commission regulated institutions and “this continues to have a great toll on the industry.”
“Apart from the denial of payment of interest on these funds, impairment of the principal is gradually wiping out the capital of many rural banks,” he added.

He said the ARB Apex Bank would continue to engage the regulators to salvage as much of the funds as possible to improve the situation of the industry.

Dr Aubynn said the economic outlook was good in the short to medium term, contingent on an increase in demand for Ghana’s exports, improved business confidence, and successful implementation of the Ghana COVID19 Alleviation and Revitalization of Enterprise Support programme.

“Growth is projected to increase to 4% in 2021 and 4.1% in 2022 according to the African Development Bank,” he said.
He said the softening of consumer confidence heightened concerned about the potential re-imposition of restrictions following the upsurge in COVID-19 cases in the first two months of the year.

However, with the commencement of the vaccine roll out and gradual lifting of remaining restrictions, the expectation is for both business and consumer confidence to rebound.

He said the banking sector, including the rural banking sub-sector, remained well-positioned to continue with the core objective of financial intermediation to support the ongoing recovery process.

Dr Aubynn said the Bank’s paid-up capital stood at GHS9.2 million in December 2020 which was insufficient for its smooth operations.
The Board Chairman called on shareholders to help in restructuring the balance sheets of the bank as required by Act 930 to relieve the Bank from its operational difficulties and improve its asset utilization and profitability.

He thanked shareholders and Board of Directors for their support and vision which had improved the bank and the sector.