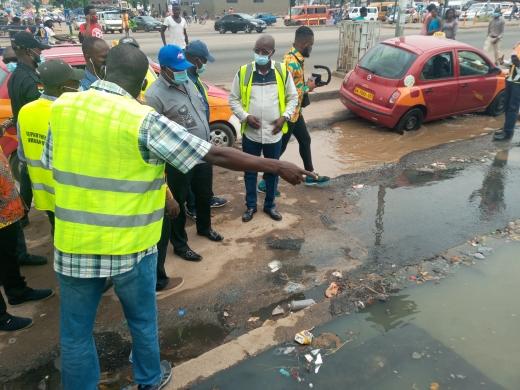 Mr Kwasi Amoako-Atta, the Minister of Roads and Highways, on Wednesday said the Ministry would soon facilitate the arrest and prosecution of individuals caught dumping refuse, including e-waste into storm drains.

He made the remarks in Accra during an inspection of works being done to desilt storm drains on the Kaneshie-Odorkor road.

The Minister said the team observed items such as deteriorated fridges, deep freezers, car tyres, and engines, sewing machines, mortar, among other wastes, removed from the drains.

The step was to reduce the flooding caused on the corridor by a downpour and to safeguard the lives of motorists during such periods.

Mr Amoako-Atta said the funds used to desilt the storms, could otherwise be used for other developmental projects if some members of the public had employed discipline in their conducts and attitudes to nature.

“Why would you throw away fridges, sewing machines, mortars among others into a drain that is supposed to help to prevent flooding and then afterwards you face the repercussions of your actions when it rains,? he asked.

The Minister added: “Why should we continue to desilt these drains almost anytime it rains? As soon as people see that the clouds are forming and it’s going to rain, they put themselves together and throw all kinds of things into the drains hoping that they will be washed to what destination?

“These are the very same people who will be complaining, blaming the Chief Executive Officers of Assemblies, government, and calling on urban roads to come and desilt. We cannot continue to go this way,” he said.

Mr Amoako-Atta suggested that a task force be created to survey and monitor areas that experience a lot of flooding incidences to arrest people who throw solid substances into the drain.

He reiterated that such offenders would be summoned before the law court and given the appropriate sanctions to serve as a deterrent to others.