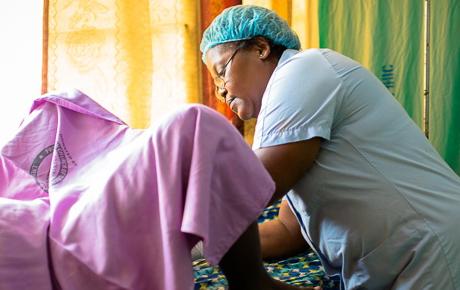 The United Nations Population Fund (UNFPA) has stated that the lives of many women and their babies who die during pregnancy and childbirth could be saved if they had access to well-trained midwives.

Speaking at the national launch of the 27th International Day of the Midwife in Kumasi, Mr. Ojuolape said midwives were the essential workforce needed to reverse these negative indices and end preventable maternal and newborn deaths.

The launch which was on the theme, “Midwives Leading the Way with Quality Care” brought together hundreds of midwives from all the ten regions, 14 of which were awarded for their outstanding performances in their various institutions.

Mr. Ojuolape said the theme for the event underscored the critical role midwives played in the health sector, saying they were the backbone of healthy families and communities.

Midwives across the country, he noted, were worth celebrating for the heroic and life-saving work they did every day, often in trying circumstances.

He disclosed that the UNFPA since 2008 had worked with partners to support training of midwives, strengthened national midwifery associations and helped enhance the regulatory framework for midwifery practice to ensure accountability.

Mrs. Netta Forson Ackon, President of the Ghana Registered Midwives Association, said the role of the midwife in achieving quality improvement in the care of the mother and baby could not be overemphasized.

She said midwives were working in poorly resourced health facilities under very poor conditions at all levels of the healthcare delivery.

“More often these midwives have to function independently or as the sole midwife for a whole community in order to offer the needed respectful maternity care to bring hope, love and good health to mothers and their babies,” she added.

These midwives, according to her, were left with little or no support and were expected to carry out a 24-hour facility without any security.