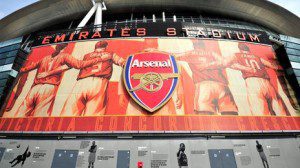 The following is the text of a Xinhua interview with Hummels ahead of Bayern’s knock-out stage matches against Arsenal at the Champions League.

Xinhua: Mr. Hummels, you once said if you were not football professional you would try to become a journalist. Is there a question the journalist Hummels would like to ask the footballer
Hummels. Maybe how’s the first year at Bayern going?

Hummels: (laughing) First of all I’d wait until the first year is completed.

Xinhua: Do you take a special interest in what the media are doing?

Hummels: Just in a normal way I think, I try to get information about things I’m interested in. But I wouldn’t say, I have a special deep insight into it which is perhaps a little surprising considering my mother is a journalist.

Xinhua: But we’ve heard you take care of your social media accounts and you write the texts yourself. Most footballers use agencies to do the work because they don’t have the time. Why don’t you?

Hummels: I never liked it when I had the impression someone was doing the work instead of the man the people are interested in. I prefer to say it in my own words. It may not be perfect regarding a clean image but, after all, it’s me and they are my thoughts. For me that is more important than professional messages which may lack a clear opinion.

Xinhua: How did you prepare for the public relations side of your profession? Did you go through a special training program with professional help or did your mother, a well-known journalist in Germany, support you?

Hummels: As for my mother, I can say she was fundamentally involved making me the person I’m. But I didn’t especially ask for special help. I rely more on a good common sense.

Xinhua: For long, you were regarded as everybody’s darling or a mother-in-law’s dream. When you joined Bayern Munich from Borussia Dortmund, things changed slightly . . . .

Hummels: (laughing) . . . . I had harder times before . . . . . in the beginning, most things look rather bright. However I don’t think there is a single person for whom things continued brightly until the end of their career. There are always things where people have other opinions and express their own opinion or way to see things.

Xinhua: Well how do you see your first months at Bayern Munich? Have your expectations been fulfilled?

Hummels: For me as an individual, things have turned out fine. No regrets at having made the move. As for the team, the results are as they should be. Maybe it’s only the way we can play. We have to improve and start dominating more than we are currently doing. We’re aware of it and we’re working on it. But after all we are well ahead of the third placed team in the Bundesliga table so that there’s a fair bit of space between us and the other clubs.

Xinhua: Did it surprise you that things worked so well for you right from the beginning. After all you joined Bayern Munich from Borussia Dortmund which is not exactly the easiest thing to do?

Hummels: It helped for sure that I didn’t join Bayern as youngster trying to break into the team for the first time. It helped a lot that I already knew many of the guys. It gives you a better feeling at the start. That it worked that well makes me extremely happy.

Xinhua: You came as the captain of Borussia Dortmund. The team captain is one of the leading men expressing his opinion on almost every occasion. How do you deal with that in your new club? Is the leader Mats Hummels a leader at Bayern Munich expressing his opinion when training and for instance when everybody is listening?

Hummels: I didn’t do any shouting when I was captain in Dortmund. Of course, sometimes you have to do some straight talking but I’m not the one shouting. Here in Munich we talk about things in various groups. And I mostly get involved in smaller groups. In Philipp Lahm we’ve got an excellent captain who takes care of the things that need commented on.

Xinhua: Was it a strange feeling having to think about the impulse to speak because you were used to doing so for many years? Do you now have to consider whether it’s right to say something or better be quiet because you’re not Bayern’s captain?

Hummels: There have been occasions when I would have said something in the past, but here in Munich there are many other players or coaches who take care of the situation and come up with a comment. When I was thinking about whether it was right or wrong to say something, others had already said something. So it was a comfortable situation as I didn’t have to say something and got to know this team is very much alive and takes care of the people in it.

Xinhua: Did you have to change much in your game after joining Bayern?

Hummels: There is one big change, namely when it comes to the balls I used to play in behind the opponent’s back line. It’s not required by our attackers to the same extent as I was used to in the last years. But in general, the job of a central defender is pretty much the same as before.

Xinhua: Looking at the present performances of Bayern, there might be two opinions. One is: The game is not as dominant as it was in the last years. The other one is: Results are ok at present. Where do you see the truth?

Hummels: Maybe in between. In the last years, I watched things from the outside. But for instance in the second half of last year, Bayern won many games only narrowly, but in the end won the championship which gave one the impression the team was dominant all the time and none of the games had been tight. But what’s true is that this season’s style is generally slightly less dominant that the one before. That is quite an objective impression I think.

But in general, I think there are many teams in Europe that have to go through difficulties. I don’t see a team for which everything is going perfectly. I don’t know why, but maybe other teams have caught up and are doing a better job. More games this season seem to be tight and more thrilling for the spectators. Just take a look into the Bundesliga. Expectations have been turned upside down when it comes to several clubs.

Xinhua: Can you tell us something about Carlo Ancelotti? In the past years, you worked with a rather outgoing coach like Juergen Klopp. Carlo Ancelotti seems to be totally different and much quieter.

Hummels: He has been through so many different situations in his 20 years and more as a coach and it gives him a calmness. He had maximum success and had to go through hard times. Therefore, he knows it’s better not to overreact in both situations. He stays quiet all the time which does not mean he does not see what is needed and is talking about it – but he does it in his way.

Xinhua: Looking ahead to the knock-out stages of the Champions League, Bayern will soon be up against Arsenal.

Hummels: Two very tight and interesting games await us. It will be a new phase for us as the games are different to the group ones. Arsenal is a team that likes to dictate and wants to keep the ball as much as possible. They have been doing that for over 20 years under their coach Arsene Wenger and are therefore a well-balanced team. The games will be totally different to the most of the ones in the Bundesliga where we mainly play defensively-minded teams.

Xinhua: Have you followed Arsenal’s far performances this season?

Hummels: I follow them of course, but more from a perspective of a football fans not caring too much about the details. The final preparations ahead of the game will take care of those details.

Xinhua: Some say we are seeing one of the strongest Arsenal teams. Would you agree?

Hummels: That’s hard to say as Arsenal, like every team, has good weeks and less good ones. It will therefore depend in which form we’re in when we meet Arsenal. Arsenal had remarkable phases winning six, seven or eight consecutive games, the same applies for us.

Xinhua: How do you see the situation in the Premier League in general? Looking at the table, things are quite tight.

Hummels: Well Chelsea has put some daylight between then and their rivals. Behind are four or five teams that are close together which means things are very interesting.

Xinhua: Do you follow the results of your former coach Juergen Klopp with Liverpool?

Hummels: I watch their games as often as I can. Unfortunately, they had some less than successful results in the cup competitions. I’m happy when he does well but at present they have to stay focused.

Xinhua: You said you watch as much football as you can for private entertainment. . . .

Hummels: . . . . not as much as in the past maybe, but I generally like to watch games when I’m at home relaxing. Yesterday I watched the entire program. First I watched the second division and then the Bundesliga games from half past one in the afternoon until the evening.

Xinhua: How many of your expectations have been fulfilled – you joined Bayern to win titles?

Hummels: We can talk about that in May, but we are in sight of all three titles. And don’t forget there will be several years to come.

Hummels: (laughing) . . . that was after day six of our pre-season training camp but then everyone feels older at that stage . . . . .

Xinhua: Behind it is the question, is there a career plan for you?

Hummels: There is some kind of plan, but maybe it will continue for a long, long time. But I will decide that later, maybe at the age of 32 or 33. Maybe one day I will want to play somewhere abroad or something like that.

Xinhua: What do you think about a player like Ze Roberto who still is still playing at the age of 42?

Hummels: Something similar will not happen to. But I’m full of respect for him.

Xinhua: In a few years’ time, you might have to adapt to several new rules in football. Let’s go through the latest ideas such as abandoning off-side. Is that something that makes sense for football?

Xinhua: Shoot-out instead of penalties?

Hummels: I think penalties contain as much drama you can hope for.

Hummels: Sin bin is definitely an option. But on the other hand, you could start to sanction time-wasting with added time or yellow cards. We had opponents this season that started wasting time in as early as the 15th minute. You show a yellow card right away and the problem is solved. But in many cases we start with that in the 87th minute, which is very late. But in general we should not change too much in football. When it comes to video technology, it would be good to have it as soon as possible as no one wants to lose a final because of a wrong decision in the last minute. Enditem