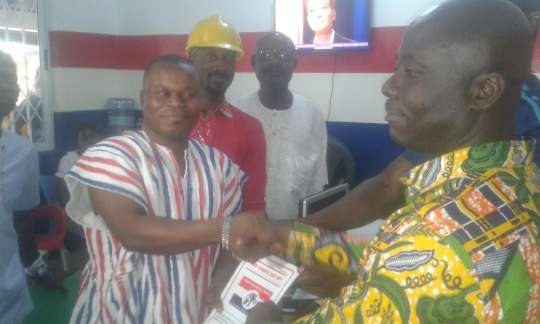 Mr Eric Nii Aryikwei Okine, Building Contractor and Entrepreneur, on Wednesday filed his nomination at the Nungua Office of the New Patriotic Party (NPP) to contest the Krowor Parliamentary seat.

The forms, including cheques, were received by Mr Enoch Boakye Yiadom and Mr Attah Gyimah, the Krowor Constituency Secretary and Chairman, respectively, after careful scrutiny.

In an interview with the Ghana News Agency, Mr Okine said some 135 supporters accompanied him to the Party Office, with about 73 of them being employees of his company.

He said he was quite confident that he would unseat the incumbent.

Mr Okine cautioned his supporters to engage in a campaign devoid of insults and promised to bring employment to the youth and ensure peace and unity among the constituents.

He said when given the nod he would continue with the works being done by the incumbent, Madam Elizabeth Afoley Quaye, and bring development to the area.