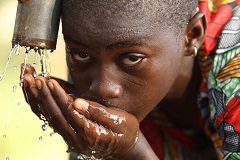 The Queen mother of Asamanketewa in the Akuapem North Municipality, Nanahemaa Yirenkyi Bruce I, has made a passionate appeal to government, philanthropist, Non Governmental Organization(NGO) and individuals to help the community get portable water. She said the main source of water for the community was a small stream called Adabon which takes its source from Yaabotwerime at Nkurakan, but was always contaminated with garbage and human excrete due to its closeness to the Nkurakan market.

Nanahemaa who made the appeal in an interview with the Ghana News Agency (GNA) said the situation was worse in the dry season.

Nanahemaa Yirenkyi said the persistent use of the water has brought various kinds of skin rashes and diseases to the people .

She said that two wells that serves a small portion of the community often dried up and all the whole community fall on the Adabon stream.

The Queenmother appealed to the Akuapem North Municipal Assembly to construct a public toilet in the community to help ease the stress on passengers who ply the road and most of the community members who have no toilets in their homes.

Nanahemaa Yirenkyi said if the community was provided with a public toilet, it would reduce the persistent defecating in bushes and at the back of people?s homes and help reduce sickness in the community.