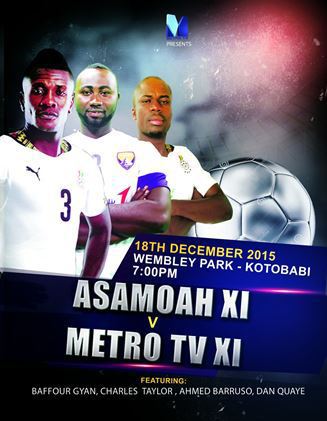 Asamoah Gyan will be leading a select-side in the maiden edition of the Metro TV Challenge Cup on December 18.

The Black Stars captain with his G-Unit will be tacking Metro TV led by Ernest Korangteng at the Wembley Sports Complex.

This is the maiden edition of the Metro TV Challenge Cup which is expected to be an annual affair.

Ghana FA boss Kwesi Nyantakyi and his Vice George Afriyie will also be competing in the game as will former GFA Executive Committee member Randy Abbey.

Heads of some corporate institutions will be making cameo appearances in the planned fun-packed event which will also provide a unique platform for the fans to interact with the Black Stars captain.

“For Metro TV and Metro Sports, this is an incredible opportunity to spend time with the Black Stars captain who is Africa’s top scorer in World Cup history,” Metro TV’s head of sports Ernest Korangteng said of the maiden Metro TV Challenge Cup.

“We are also delighted to be taking these icons and personalities to the communities Kotobabi and its neighbouring areas like Alajo, Nima, Maamobi, Pig Farm, Dzorwulu and Abelenkpe, close enough to the people who love and admire them from a distant.”