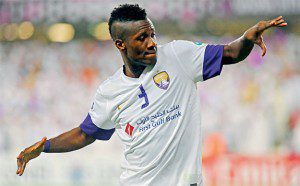 Gyan, who has been a key player for the club over the past two seasons after moving from the English side Sunderland, is expected to play a key role for Al Ain in the match.

?They are one of the best teams in the world and they have got good players who will be taking part in the World Cup.

?For them to come here is an honour and to play against some of the best players in the world is an honour for us.

?We cannot wait to play against one of the best teams in the world. We really appreciate and thank Shaikh Mansour bin Zayed Al Nahyan, Deputy Prime Minister, and Minister of Presidential Affairs, for making this game happen. We cannot wait,? he said.

Gyan plied his wares in the English Premier League for Sunderland before making a move to the UAE. Gyan said that he didn?t have any friends in the Manchester City squad but knows them.

?I?m not close to them but definitely everybody knows them. They are playing against us and we have to test our level,? said Gyan.

And he reckoned it will be a good game and one where they can test their skills against the best.

?We have experienced and great players. They have played in bigger competitions. This is a friendly game and we have nothing to lose or prove,? Gyan said.

?The confidence level is really high and it will be a good test of our skills. We have quality players and it is going to be interesting. We have a lot of players coming from outside to support the team.? he added.