Ghana skipper Asamoah Gyan is among the top 10 most earning footballers in the history of the game now according a report by English tabloid The Sun.

Gyan is tenth on the list which is made up of the biggest football stars across the globe taking into consideration their weekly wages.

Top on the list are players who are currently plying their trade in the Chinese Super League with Manchester United’s Paul Pogba being the top in Europe.

Barcelona’s Neymar made his entry into the top 10 after his new deal with the Spanish club that will keep him at the Camp Nou until at least 2021.

Hulk who replaced Asamoah Gyan at Shanghai SIPG is the leading player with a mouthwatering sum of GHS 1,540,000 a week’s wages.

World Player of the Year, Cristiano Ronaldo and rival Lionel Messi make the top 10 with Ghana international Asamoah Gyan having his name on the prestigious list.

He joins Yaya Toure are the only two African players to make the list.

Below are the top 10 earners in world football: 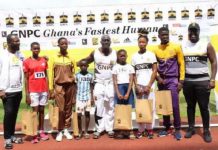