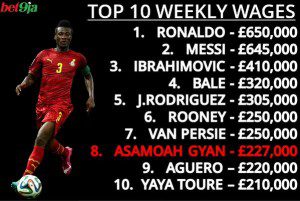 Ghana striker is the highest paid African footballer in the world

The 29-year-old signed a two-year contract on Friday morning, that will him see earn a reported ?227 000 per week.

?I thank God for this special day, to my family, former playmates at Al Ain and to my fans,? he said, as quoted by his official website.

The Chinese club was unable to organise a press conference for Gyan?s official unveiling due to an upcoming away league match. Gyan will now likely be unveiled on Tuesday or Wednesday next week.

The Manchester City midfielder reportedly earns ?210 000 per week, which means Gyan overtakes him on Forbes? Rich list as the highest paid African.

The striker is the third big-name player to join the Chinese league after Tottenham?s Paulinho and former Chelsea striker Demba Ba already moved to China.

Do you think Asamoah Gyan deserved his whopping salary? Have your say in the comments section below.