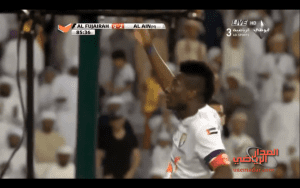 Asamoah Gyan was in Accra over the weekend

Ghana superstar Asamoah Gyan made a late substitute for Al Ain in their 0-0 draw away at Al Wahda on Monday night, just hours after returning to the UAE following his travel to his home country to supervise his boxing promotion.

Al Ain have already won the UAE Pro-League this season and, heading into Monday night?s fixture, had already accrued 55 points from 23 matches.

Their away draw against Al Wahda?the fourth-placed team in the division?means that with only two games left, Al Ain are eight points clear of second-placed Al Jazira. The Spider may have closed the gap with their own victory away at Al Sharjah, but the title is already guaranteed for Gyan and his teammates.

As they seek to end the season strongly, Al Ain will be disappointed at having ended their four-match winning streak with a goalless draw away at the Al-Nahyan Stadium?at the home of one of their four top-flight Abu Dhabi rivals.

The club have already advanced to the last 16 of the AFC Champions League, and with further battles in store this campaign, opted to rest Gyan.

The striker came on in the 74th minute?replacing Diaky Ibrhim?but was unable to secure the full complement of points for the Garden City club.

?It was a strong 90 minutes. We played the first half better to control the game and had some chances to score, and even when Wahda played more offensively in the second half we defended well,? coach Zlatko Dalic said after the match, as reported by The National.

?OK, we missed a few chances, but a scoreless draw was a fair result. It is true that we had already achieved our objectives ahead of this match but we always want to play the best available team. This is my style.?

The UAE Pro League crown is Gyan?s third domestic championship since moving to the United Arab Emirates in 2011.

He will also be looking to lift the President?s Cup once again?he won the competition previously in 2012?and make a mark in the latter stages of the Asian Champions League.