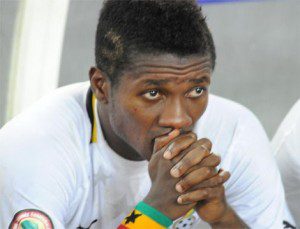 Ghana Black Stars captain and Al Ain striker Asamoah Gyan is debating whether to delay his depature to his team?s preseason in the UAE.

A source close to the striker tells VibeGhana.com that he is seriously considering delaying his return to the pitch following an accident early this month involving his best friend Castro.

?He surely does not want to go to Al Ain for their July 20th preseason camp, he doesn?t want to go?.

His brother Baffour Gyan is said to be making efforts to convince Asamoah Gyan to fly out to his United Arab Emirates base assuring him that he will keep him updated on the ongoing serach for Castro.

?Baffour and Asamoah are both hurt about the incident, but Baffour feels that Asamoah should return to the pitch and count on him to keep him update on the search?.

?I really don?t think he is ready for the field now, he is in a state of shock right now? the source added.

Asamoah Gyan?s musician friend Castro and his female companion Janet Bandu where involved in a jet ski accident earlier this month in the Ada waters.

The two are believed to have drowned during the accident and a search rescue effort for them has been ongoing since July 6.