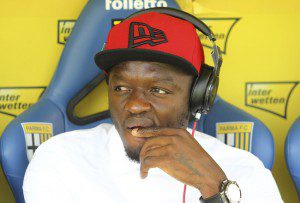 Ghana captain Asamoah Gyan is hoping for a reunion with suspended international teammate Sulley Muntari but says that decision is completely ‘out of his hands’.

Muntari has been frozen out of the national team after he clashed with top officials of the Ghana FA during a wrecked 2014 World Cup campaign in Brazil.

The Ghana FA acted swiftly and sacked him from the team’s camp in disgrace alongside his close associate and Schalke outcast Kevin-Prince Boateng.

There have been several calls for the suspension to be lifted despite the player’s unapologetic stance.

Ghana captain Asamoah Gyan has touted the quality of the former AC Milan man but says his return to the national is completely ‘out of his hands’.

“We all know Sulley and what he brings to this team. His quality is immense and I will very glad to welcome him back,” he said

“He has scored very important goals for our country and so yes, we need him.

“But I am not the coach and so can’t determine when he will earn a recall.

“If the coach decides to recall him, we’ll be happy to have him back. But those kinds of decisions are not part of my job really.”

Muntari is yet to publicly apologise for his behavior even though his father Alhaji Muniru Sulley has done so on his  behalf.